Julia and her Indian friend

I scheduled this post to publish while my plane is in the air on the way to Tokyo! Of course, I am so excited for my upcoming adventures. However, do you think that you need to get on an airplane to be a global citizen? Absolutely not!

This spring our students had an assignment to make a “cultural connection” right here from home. Some of them Skyped with people in other countries, but most students were able to meet someone right here in Massachusetts that could teach them about another culture.  Overall, the students seemed to really enjoy the experience. But you don’t need to take my word for it! Here are some quotes from students about what they learned:

“Even though India is all the way on the other side of the world, there aren’t that many differences between American culture and Indian culture.” 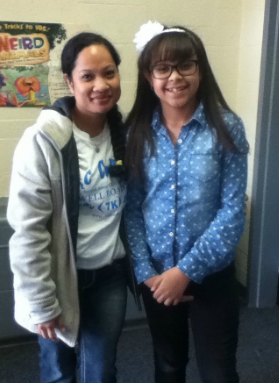 “One story that my teacher told me was that he loved to pick strawberries at his grandfather’s farm, just like I like to pick apples at Parley Farms.”

“When I drew my picture I said family is very important and during the interview when I asked what is his best memory from in Italy was. He said being so close to his family. He said that being with his family especially on Christmas was very important to him. I thought this was very interesting and funny because that is basically what I said.”

Manny asked his questions over a meal

“I found the fact that people in Russia smile less than Americans do most interesting, because I thought that the whole “Grim Russian” thing was just a stereotype. This is different from American culture because Americans smile…A LOT!”

“In Bosnia, Coffee is not a drink that one rushes out to Dunkin Doughnuts to pick up before work. In Bosnia, one is either over at someone’s house for coffee, or friends meet up at a coffee house where they sit down to chat over coffee. In coffee houses, there are no plastic cups, because everybody drinks coffee while sitting down with others; the cups are made of ceramic.”

“I think the most interesting thing that I learned is about the holidays because one of the holidays they celebrate is Raksha Bandan which is when the sister ties a bracelet on the brother to show a symbol of their relationship, and the brother gives something to the sister to show that they are protected by them. I find this interesting because I think it is very nice to know that someone is watching over you and protecting you from any danger.”

“They wear mostly wool and their sweaters had cables on them. Cables are different lines or decorations on a sweater that tells you about that person (like how many kids, what his/her hobby is, etc). When a fisherman died in a storm, and washed up on shore, they could tell exactly who he was because of his sweater. This is different from my own culture because we don’t wear sweaters that tell something about you, and we don’t wear a lot of wool.”

“One similar thing about our cultures is it that they have a lot of the same values as Americans. I thought it was really cool to learn about someone else’s culture and I would like to do it again. I loved doing this Interview.”

Cassie and Dalena had a lot of fun doing this assignment

“I have had so much fun doing this rubric and I am excited to learn even more about different places around the world.”

As you can see, students did a lot of global learning without ever leaving the country. Did you know that about 1 in 5 Americans speaks another language other than English at home? There will be lots of opportunities to do your extension work this summer and write a blog entry about a global experience.

To close out, I want to share this wonderful video that 6th grader Sonakshi made about the experience interviewing another student, Anita. Enjoy!