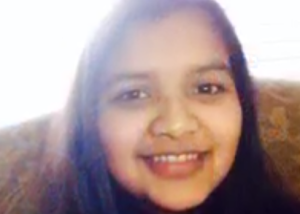 You might remember Sonakshi from her video about world religion. Today, she takes us to her family’s home country — India!

I was on the airplane and about to land in India. It was not as hot as I expected, because it rained few days before. I was in the taxi with no seatbelt on since you do not have to wear one. I was so congested that I was basically laying as I would to go to sleep. When we got to Faridabad, Haryana, I was so happy to meet everyone. The ceilings were so high and there were fans on it. No A.C. anywhere but it was okay until, three weeks later which was like the day I thought I was going to melt. Anyway, soon I was going to Jhansi where my Mom used to live. It was not as hot. One thing that caught my attention was that there were animals: dogs, cats, mouse, lizards, pigs, and cows on the streets. It was crazy but it was India.

Transportation was really different in India. There are not any lines to divide who is going and coming. People always stay on their left rather than their right.

On the left is a rickshaw that is a transportation costing a low amount of money. You sit in the back, behind the man who rides the bike. On the right is an auto which is a moving mobile with no doors and goes almost as fast as the cars. I have gone on both of them.

I have not visited the whole india but I did go to see the capital Delhi.

This is the Rashtrapati Bhavan. I have never gone this close but I have seen it with my own eyes which is a big thing. It is the official home to the presedent of India. I have gone to many places like the India Gate, the Taj Mahal, Lok Sabha and more, but this was the most Interesting place after four years coming back to India. I hope I go back to India again, and I hope you all enjoyed my trip in India.