Given how many amazing birds we saw in Etosha National Park, I felt like they deserved their own blog entry. They’re small, but there’s lots to see. I have to start with my favorite, the lilac breasted roller. It’s the national bird of Botswana, and I first saw it there back in 2011. It continues to be one of the most beautiful birds I’ve ever seen. How could I choose a favorite photo? I’ll include only four: 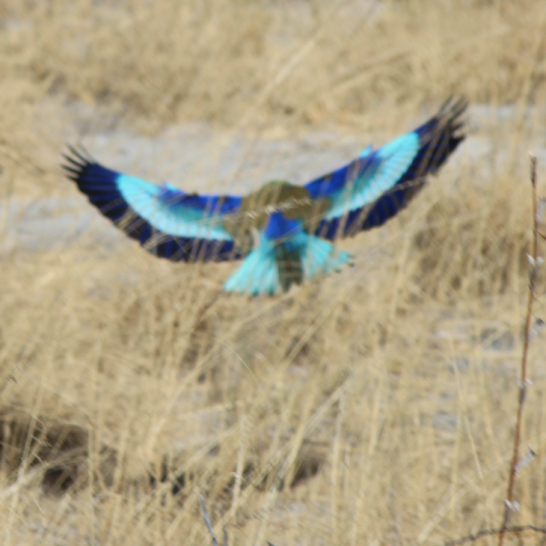 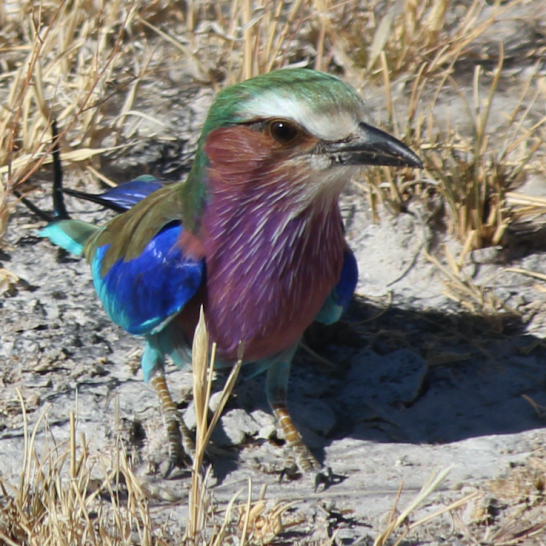 Also, you are probably familiar with the biggest bird of Etosha, right? The ostrich is a silly looking animal, but also quite interesting. The males are black and the females are grey, so this one is a male: Not sure what kind of dance is going on here:

And one more shot in front of the salt pan: 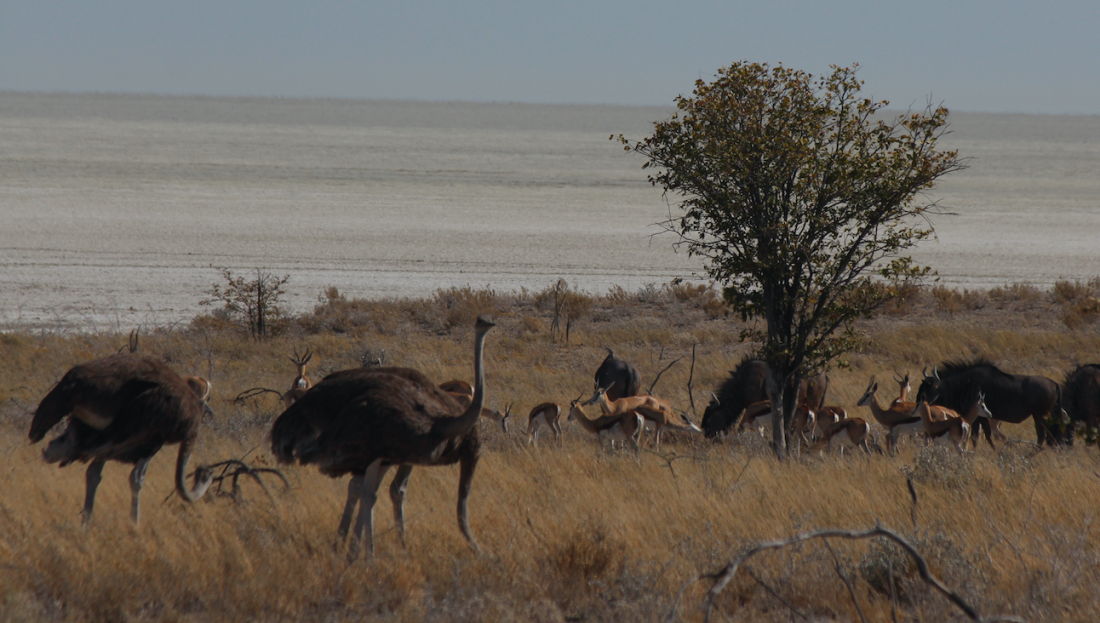 And a little video of how they run!

We saw a number of other really large birds at Etosha. This one is called a kori bustard.

These are called secretary birds! They’re huge too! Not quite as large, but with beautiful “hair” is the grey go-away-bird. Yes, that’s really what they’re called, because of their call.

Some birds eat meat, and they look a little less friendly. According to our best identification efforts, we think this is an ovambo sparrowhawk:

And a southern pale chanting goshawk: You might be able to tell that the vulture on the right is way bigger — it’s a different kind called the lappet-faced vulture.

Here are some white-backed vultures with a jackal and an even bigger, uglier bird called a maribou stork. 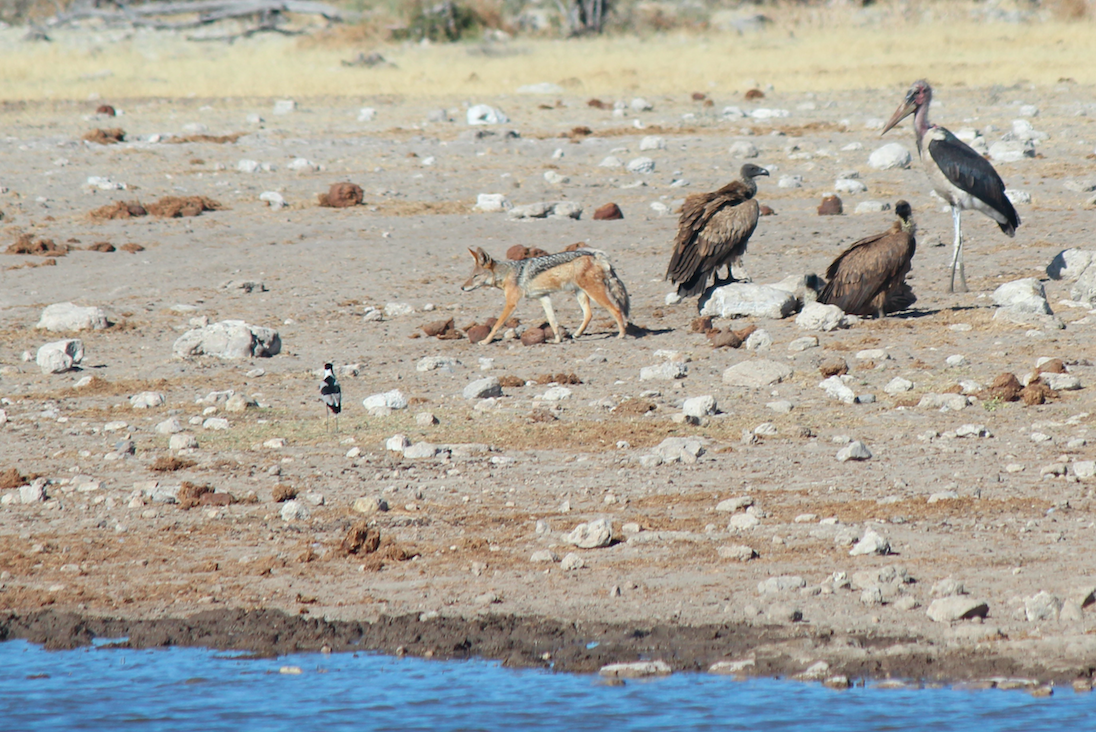 Some of the most common birds were quite unusual to my eye, like this cape glossy starling: 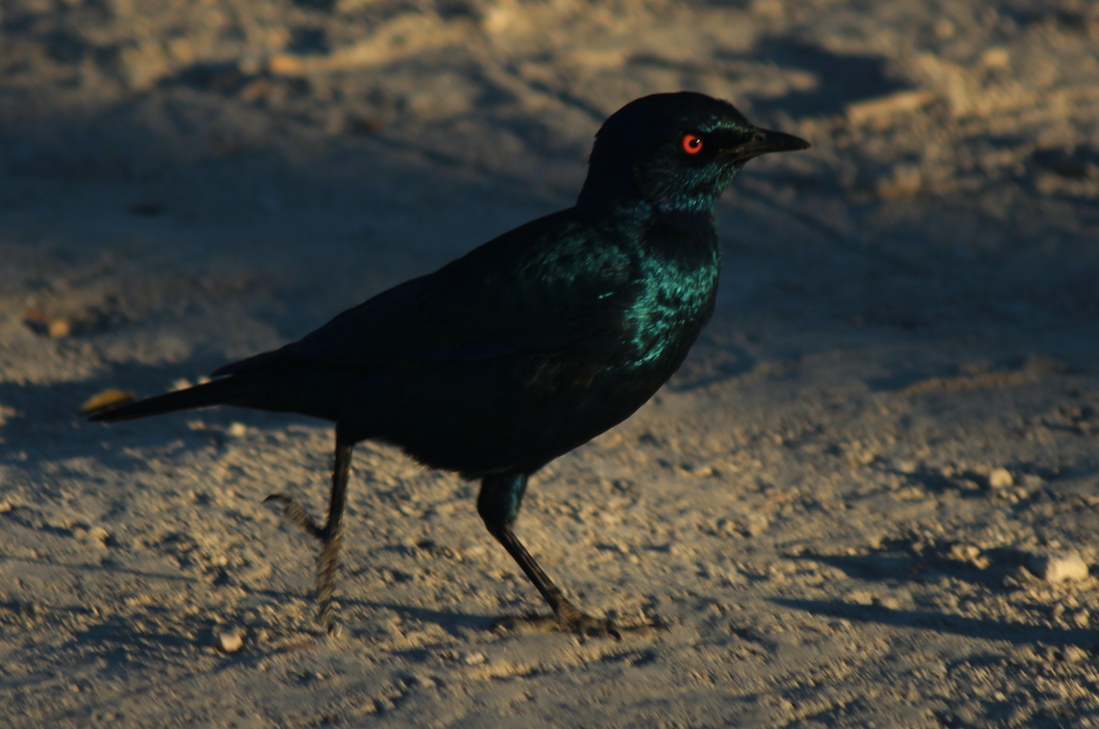 Another super common bird was the helmeted guinea fowl. They’re the chicken of Southern Africa:

One morning we woke up early to walk to a watering hole that was near the campsite. Unfortunately, there were no big animals drinking. Just hundreds of guinea fowl:

Maybe you need to see the video to get a sense of how peaceful it was, the sounds of the guinea fowl and their quiet sounds.

That morning, we also spotted this red-billed hornbill, which made the early wake up worth it.

At a different watering hole, we saw this great egret. Most of the time, we weren’t able to get so close, because it is forbidden to get out of your vehicle, but at certain campsites, there are watering holes with viewing platforms surrounded by glass. So, I was in the “cage” and not the bird, and we were able to get really close.

So many expressive faces! 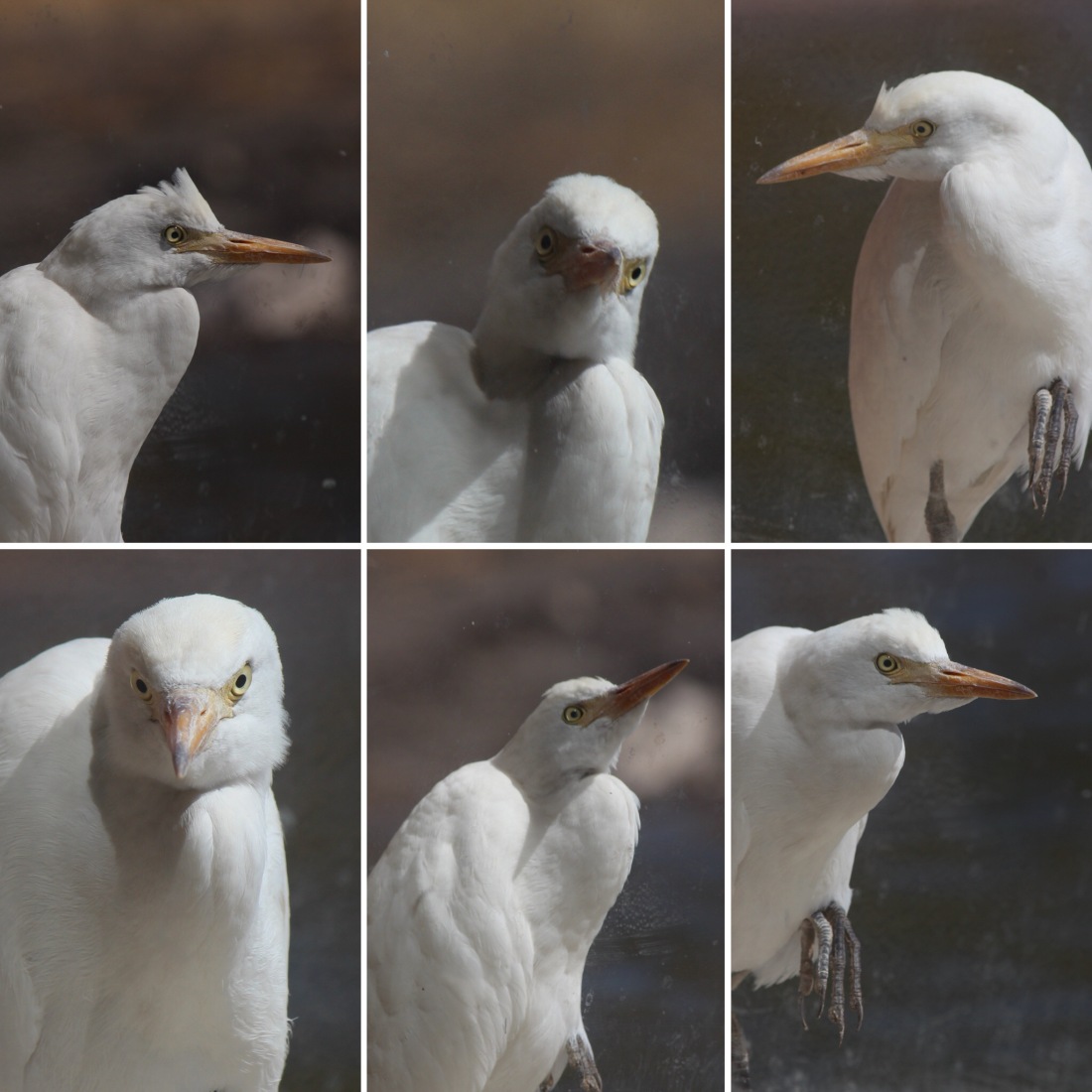 There were many more beautiful birds, some not identified or I wasn’t able to capture a picture. 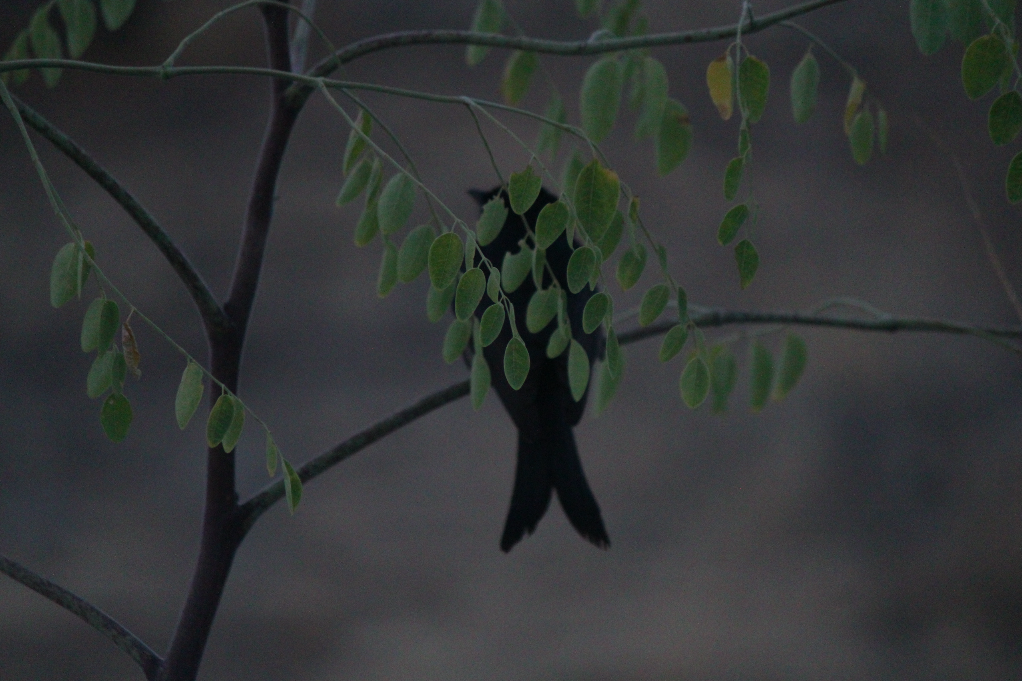 I totally had a moment with this little owl, maybe a pearl spotted owlet, but didn’t have my good camera on me. So all I have is the memory and this blurry phone picture: 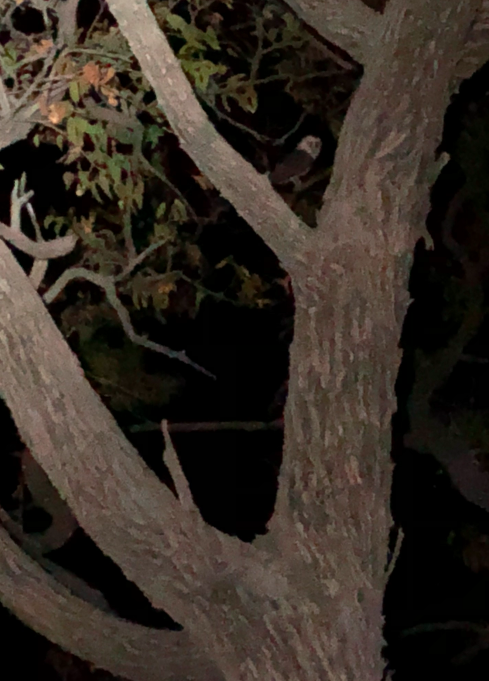 The challenge of capturing these creatures with photography was a lot of fun. Sometimes I was happy with the results, and sometimes not. 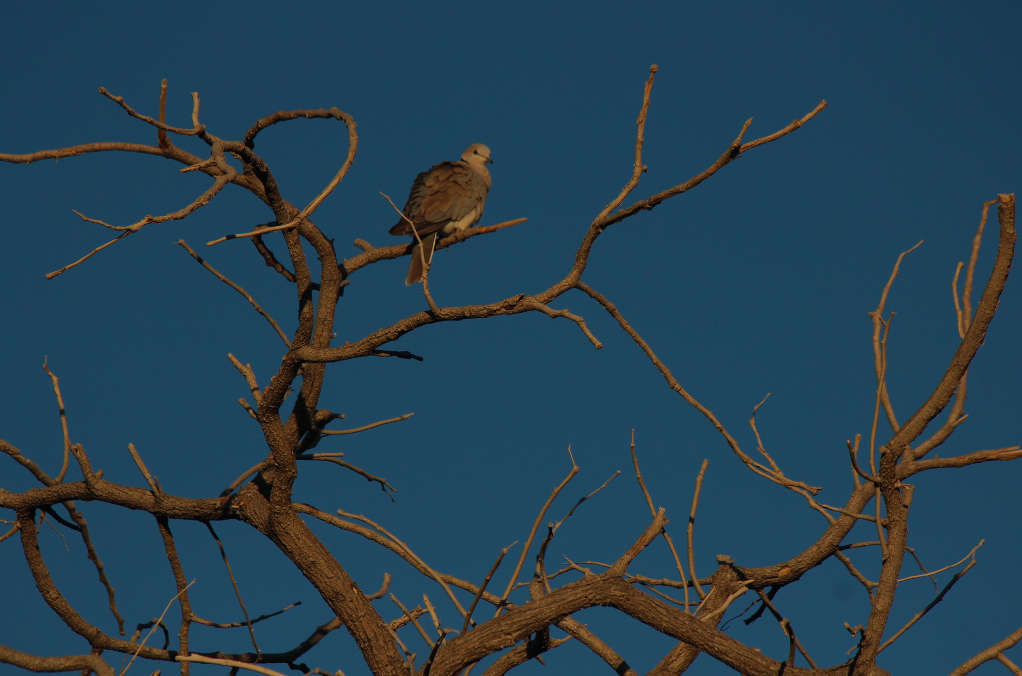 Sometimes I caught the bird in his natural habitat, and sometimes just on the ground. 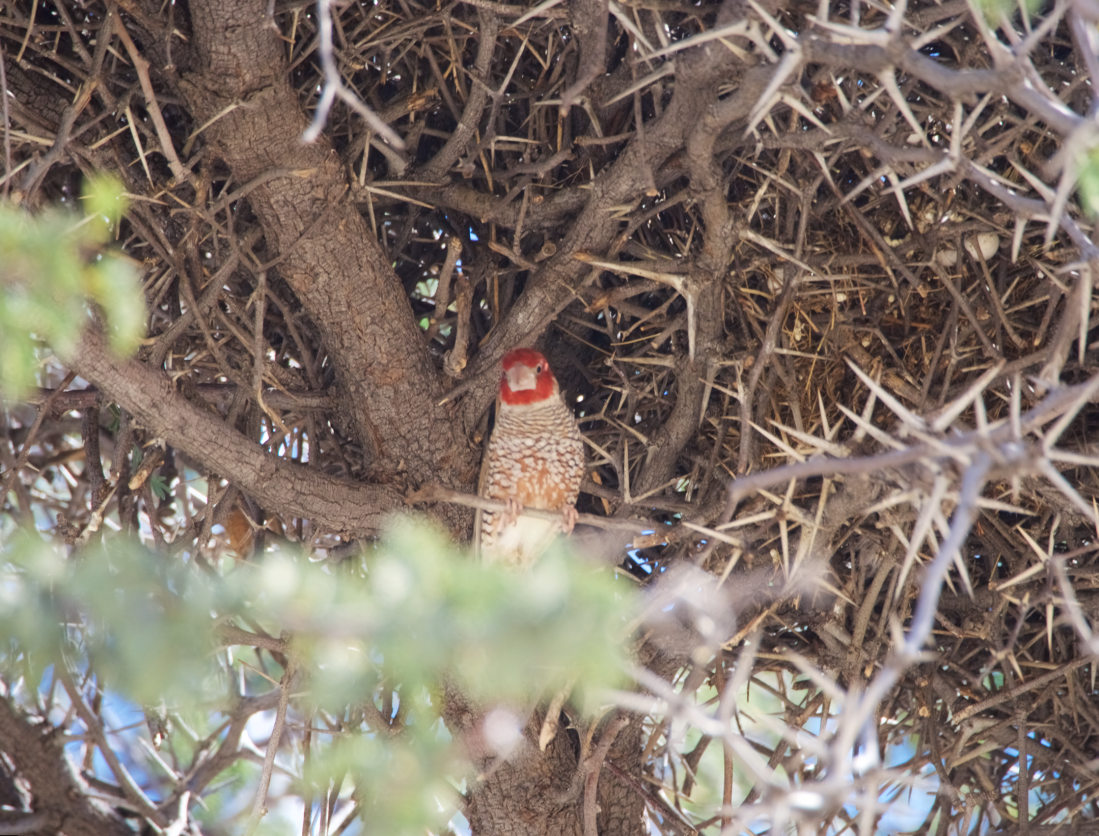 And sometimes I just marveled at the nests themselves, often quite spectacular: 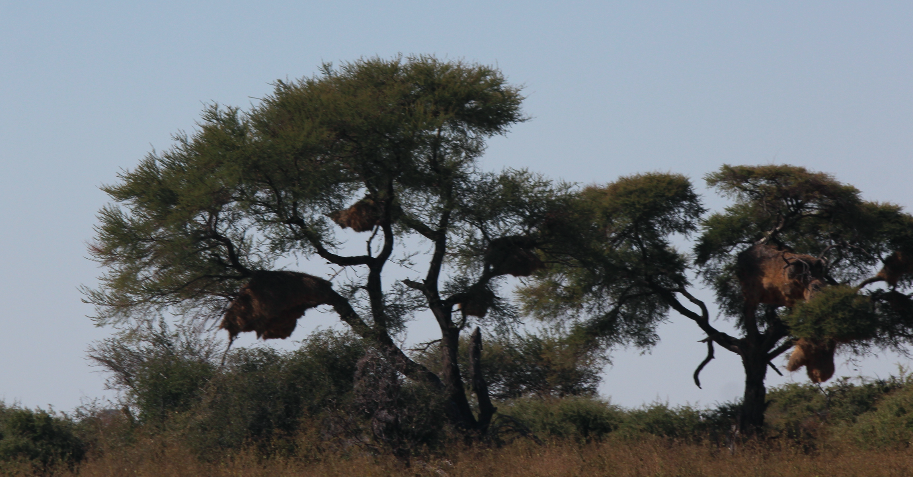 Which is your favorite bird?