Hiking Inside the Crater of Ijen Volcano to See Blue Fire

People say going to Bali is an adventure, but a few days ago, we went on a REAL adventure. We found out that it is possible to hike inside the crater of a volcano on the island of Java, and somehow we decided that this was a good idea. It’s become more popular since there was a National Geographic article that went viral, documenting the volcano’s rare and beautiful blue flames. I was terrified to do this, but it seemed like a once-in-a-lifetime opportunity. So, we paid one million rupiah per person (about $74) to get this all arranged. The journey was part of the experience, so let me give you a sense of what it was like.

We were picked up at our hotel at 11 PM, and learned that there would be 7 travelers in our midnight escapade — us, a Swiss family, and a Belgian couple. The driver took us to the ferry to go over to the island of Java, and he got us on the boat and sat with us. For the hour long ride, we were inside a strange room where we could watch a TV playing what appeared to be Indonesian Karaoke. And then we arrived in Java!

While Java is also part of Indonesia, it is a big island and almost entirely Muslim, whereas Bali is a small tourist-centered island that is mostly Hindu. After getting off the boat, our drivers turned us over to our Javanese guides, Errol and Gede.

We got into two other taxi-ish cars to head to the base of the volcano. At first, we saw lots of billboards, mosques, and urban bustle, but then we were in the countryside, winding through the forest. Those curvy roads went up and up, until my ears popped. We turned off the AC because the air outside got crisper as we went into higher altitudes. When we finally arrived at the trailhead, we got out of the car and it was so so cold. I had only brought two thin long-sleeve shirts.

I put on both and was shivering. Luckily, we found a little stand by the toilets and for $14 or so, I got a new American knock off hoodie. By 2:30 AM or so, we were ready to hike in the cold and dark. And so we set off.

The hiking wasn’t hard at first, but pretty quickly it got steep. It was a pretty sandy road-like surface, but just a lot of incline. We took our time as we ascended. The Swiss family, who were used to mountains, raced ahead. We had head lamps and flashlights, but we almost didn’t need them, because the moon was full and pretty bright, and our eyes adjusted to the dark. In the distance, we could see the outline of other volcanos against the night sky.

And then we arrived at the top of the Ijen Volcano. In the dark, we couldn’t see everything, but the sight was still incredible. Down in the crater before us, we could see the lights of hundreds of other hikers all around the top and going down.

It was truly unbelievable. As I peered into the crater, I could see the blue flames and smoke in the distance.

The steep rocky trail down was intimidating, but at this point, I was just in so much awe at being in this spectacular place. It felt so powerful to see all the lights of all the other hikers from all over the world, doing this with us. Two of the members of our group decided to stay there, because the way down was rocky and the fumes strong, but the rest of us began the decent into the crater.

We put on gas masks that were available for rent from salesmen on the volcano. The smell of sulphur was powerful, and it kind of has a rotten egg smell, in addition to being not great for your lungs. The mask worked pretty well though, and I was so happy to be there. I kept wanting to look up to see the blue flames ahead, the crater edge, and the moon, but I had to watch my feet as I hiked.

As we hiked, occasionally we needed to move over for miners carrying giant baskets of sulphur up from the base of the crater. It looked extremely heavy. Our guides told us that they make 3,000 rupiah per kilo, and that they carry huge loads, like 65-80 kilos at a time. If I’m doing my math right, that means they make about $15 per load of 150 pounds. That’s not a lot of money. Sometimes they also sell little sulphur sculptures to tourists like me (I bought a little turtle made of sulphur from this guy): 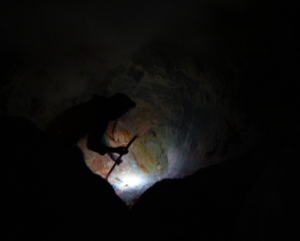 At the bottom we could see lots of people, lots of smoke, and giant blue flames.  In addition to all the hikers, we could see the miners working, collecting the sulphur right next to that intense heat. Their job must be so difficult. We were told that say the blue color comes from the sulphur of the volcano burning at very high temperatures, over 1,000 degrees Fahrenheit. Imagine having that job! It was truly an amazing sight, and I couldn’t come close to capturing it on camera. 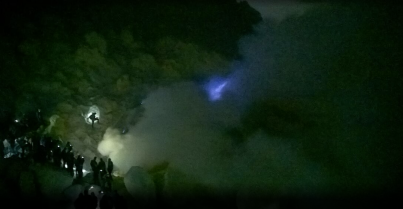 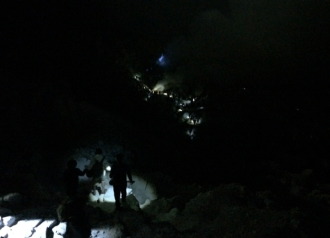 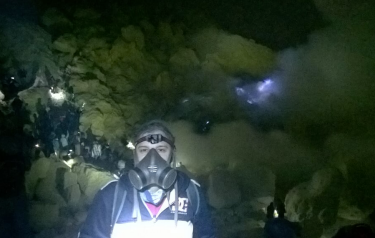 Here’s a little video of the dark hiking experience, but maybe you can sense my excitement:

Adrenaline flowing, the hike back up to the top of the crater was hard, but felt great, knowing what we had accomplished. And the sun was coming up, so the rewards at the top were huge!

As the sun filled the sky, the moon still visible, it was like a black and white picture turning into color. The world came alive, and we were in a stunning place. I could really fully see the crater now, and for the first time, realized that there was water in there! I couldn’t see it before because of all the smoke.

The views were truly beautiful:

I was so happy to be in this place, to see something like this that I never dreamed I would see.

Me in front of the crater

My little friend Loki made it also! 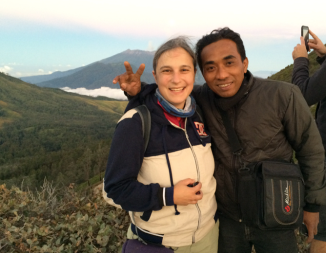 Me with one of our guides

Sadly, then it was time to make our descent back. Going down is harder on the knees, but now there was light, so we could look around and see the beautiful views. I had to keep stopping for photos. It just couldn’t believe my eyes.

The light from the sunrise on the other volcano in the distance was so nice, and just then, as we hiked down, we got to see an eruption! The puffs of ash got bigger as we hiked.

We also passed more miners carrying their sulphur down. Some thought it was funny to try to see the tourists attempt to lift their baskets, mostly unsuccessfully. Some guys also carried up carts to wheel the heavy rocks down. The sulphur is a bright yellow color when it’s not heated to ridiculously high temperatures. 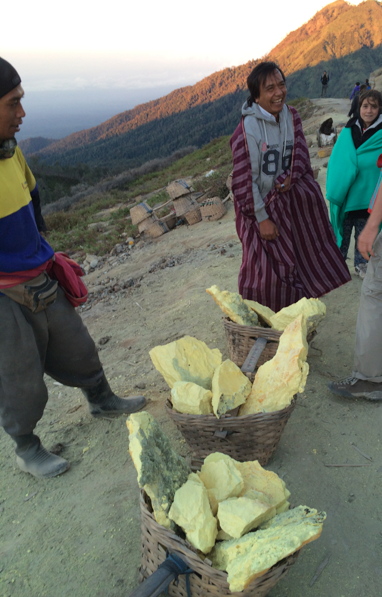 By now, it was around 7 in the morning after a missed night of sleep, but the tiredness didn’t kick in until we got back to the car. Hiking down we were still in awe of what we had seen, and seeing the volcano erupting in the distance.

The ride back was sleepy, though our car struggled a bit, and needed to be pushed to get going, which didn’t instill too much confidence. But we made it back to the ferry, and then back to Bali safely. It was fun to watch the locals waiting to get off the boat:

And then our motley, tired crew made it off the boat as well, found our drivers, and headed back to our hotels to sleep. With only a short time left in Indonesia, it was then time for some Balinese relaxation. By some weird twist of fate, we managed to get two private villas with private swimming pools for our last two nights in Bali (without spending much money at all). 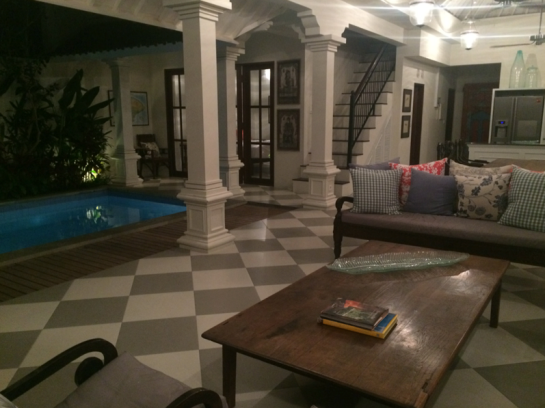 Since we then needed to travel 24 hours to get to Tokyo, sleep hasn’t been the highlight of this part of the vacation, but it’s been worth it.