Diego hasn’t even started 6th grade yet, but he’s already a master blogger. Check out his third post from Brazil. If you missed his other posts, he wrote about visiting Rio and even some interesting history lessons.

Last week I went to my grandparent’s beach house in Buzios, Brazil.  Buzios is a peninsula in Brazil.  It is located 120 km from Rio de Janeiro where I am currently staying with my grandmother.  Also, Buzios is surrounded by beautiful beaches. 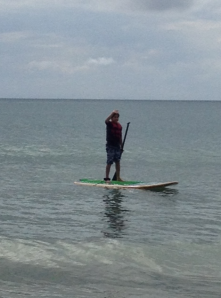 To start off I would like to talk about what I did at the beach and what I learned.  My favorite activity was paddleboarding.  I liked it the most because paddleboarding was a lot like canoeing, but standing up.  Also, you could sit or kneel instead.  When paddleboarding, it is easier to stand in the middle of the board.

While I was at the beach there were holes in the ground.  They look like ant hills but they are little worm holes that you can dig out to get the worms.  Then, you can use the worms as bait when fishing.

Another activity I did was boogie boarding.  I liked this so much because you jump on a big wave, you kick like crazy, and the wave will bring you back to shore if you timed it perfectly. Most likely you will get sand in the places you don’t want sand.

While at Buzios, I played soccer with a couple of girls that were my grandfather`s friends.  It was fun but hard to play because we couldn’t communicate.  This was because they spoke Portuguese and my brother and I spoke English.  Playing with them was both fun and comical because whenever they scored they would scream “goooooooooooool” and when the younger one fell down she made a comment about Neymar, the best player in Brazil, who broke a vertebrae when he was kneed in the back against Colombia.  I feel that in Brazil they would play soccer anywhere because we played with two park benches as goals.

The next time I write a blog it will be about going to the Sugar Loaf, a big mountain in Brazil that gives a beautiful view of Rio de Janeiro.