A Long Journey and a Short Night in Dubai 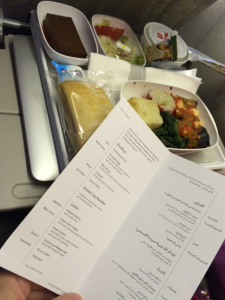 A menu with meal choices!

As it turns out, it takes a very long time to get to Bali, but we are finally here!

We were lucky to find a flight on Emirates, which ended up being as great as its ratings. While the seats weren’t particularly comfortable (not a lot of leg room, just like any economy seats), we were fed 7 meals during the approximately 34 hours that we were under their care (12 hour flight + 13 hour layover + 9 hour flight). It was a lot of food, and pretty great quality! We didn’t even need to take advantage of their offer to serve Cup O’Noodles upon request, but we did watch some free movies and play some video games with the little attached controller. 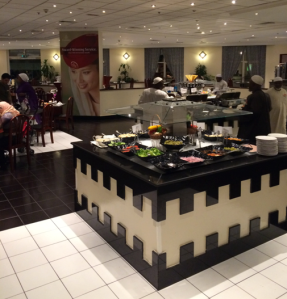 Buffet dinner at the hotel in Dubai

The best part of the journey was that Emirates has a program called “Dubai Connect,” which basically means that they put us up in a hotel and gave us meal vouchers during our long layover. It was enough time to explore Dubai a little bit, take a much needed shower, and sleep in an actual bed. But not for too long — the wake up call for our flight the next morning was at 5 AM.

Dubai is a big city in the country the United Arab Emirates, and it is an oil rich metropolis in the middle of the desert. It was fun to guess at all the interesting roads and buildings as we made our decent into the city. 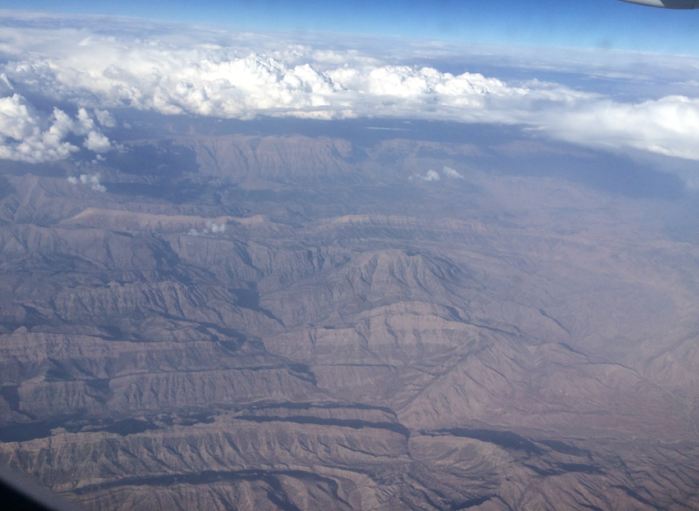 Not the UAE, but taken somewhere on the way, over Central Turkey, I believe. The UAE is flat. 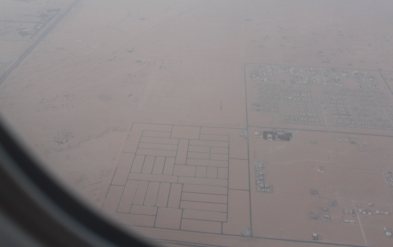 The flat desert land on the outskirts of the city 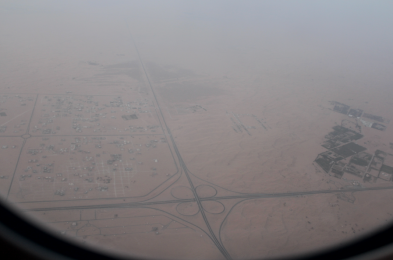 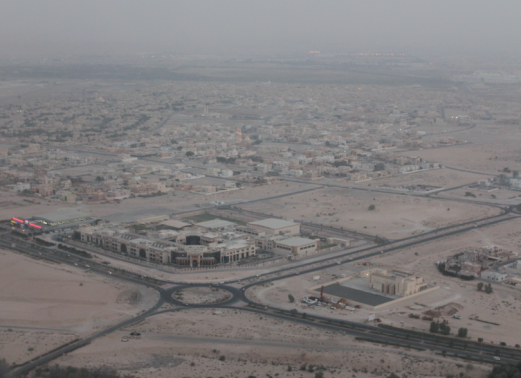 As we got closer to the city, there were more buildings 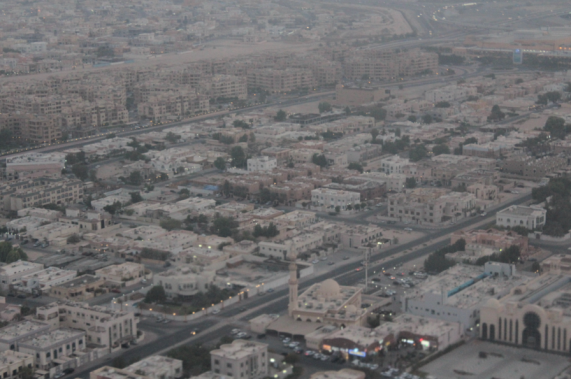 Lots of people live in Dubai! 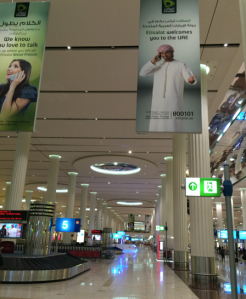 Despite the fact that there are camel souvenirs everywhere, the city itself is extremely cosmopolitan. In some ways, it looks like New York City or any other major urban area. But it’s the Middle East — some people walk around fully covered in burkas, while others wear t-shirts.

We arrived around 8 pm, as it was getting dark. Still, when we exited the airport, it was very hot, and humid enough to fog up glasses. Although it would have been nice to see Dubai during the day, the temperatures average above 100 degrees Faranheit in the summer, so evening was much more manageable. Unless of course, you can afford to go indoor skiing, which apparently exists at a mall here. We didn’t do that. 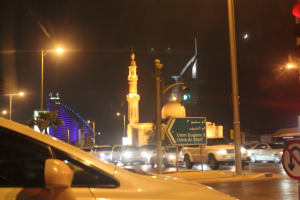 What we did do was get a taxi driver to show us a few sights. Driving around was fun — we saw lots of flashy billboards, skyscrapers, and all sorts of international companies, from Starbucks to Porche dealerships. Our first stop was the Burj Khalifa, which is the tallest building in the world. 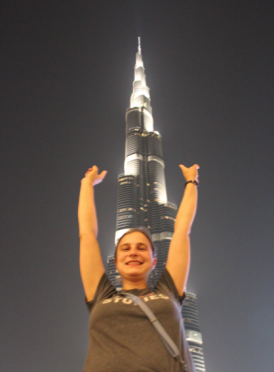 Me and the tallest building in the world! 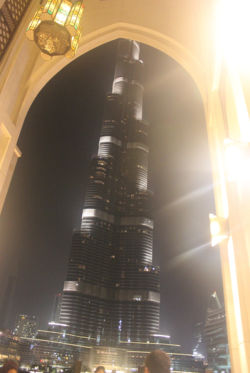 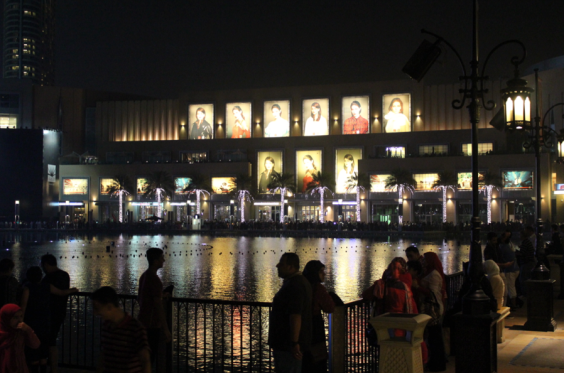 The Dancing Fountains at rest

Right there in front of this amazing tower, we saw the famous dancing fountains. It was pretty incredible – I’m not sure if my video quite does it justice, but I did my best:

Sea). Since this was my first visit to the Middle East, that was pretty exciting. It was also fun to just wander around and see the architecture, some very traditional looking but most very new. There are lots of fancy hotels on the coast. Apparently, the one behind me here is 7 stars, and there are suites that cost over $20,000 and include a helicopter pick up at the airport. Not too shabby. 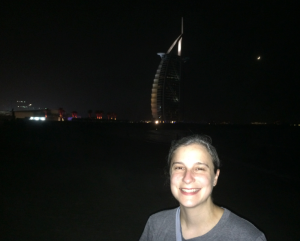 We didn’t have a ton of time, but we did manage to sneak in a little shopping. Emirati people use the Dirham for their money, and the exchange rate is about 3.5 Dirham to 1 U.S. dollar. It was fun to look around some shops, but I ended up only buying one souvenir – a deck of stunning gold playing cards which seemed necessary for my collection! There were a lot of other interesting products to check out too. 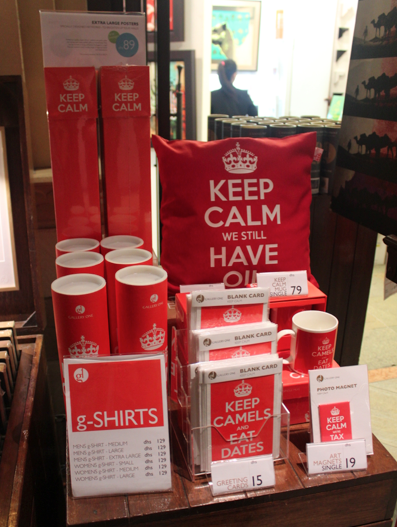 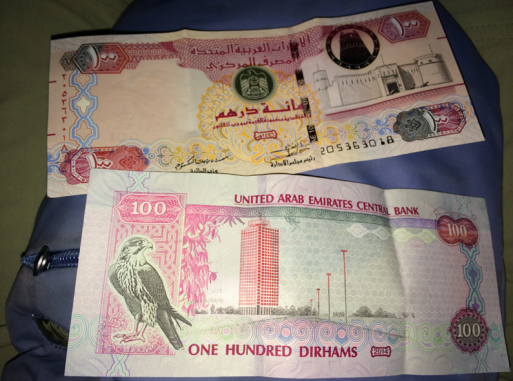 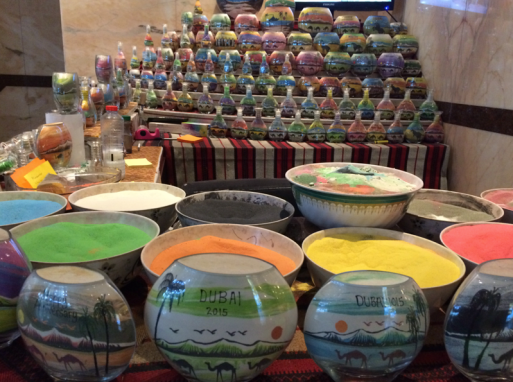 Some of the shopping was pretty touristy, but it was fun anyway. I liked watching the guys make the sand art, for example:

It was a short visit, but really fun despite being sleep deprived. And certainly, that was part of the adventure. Dubai is a hub for many airline flights, so it is not impossible that future travels will find me back there. Neat map showing flights connecting in Dubai! See if you can find the US here!

For now, the next adventure is starting soon. We arrived here at the hotel in Bali at midnight, so I really don’t know what to expect when the sun rises tomorrow. Stay tuned.