I just arrived in Iceland, and as far as I can tell, this place is magical. Have you ever seen a waterfall where the water flows out of an underground river?

What about water that comes out of the ground boiling and gets piped in to heat people’s homes?

What about an expansive ocean and sky that are so big and blue that you can barely tell them apart?

Even the local people here believe in magic. I’m still learning, but it seems that there are all sorts of myths to discover, from the stories told back in the 13th century by people like Snorri Sturluson to the elves which watch over the people today. Apparently, nobody can build in the capital city unless the elves give approval! The majority of Icelandic people believe in elves, who seem to be hidden people who can be small enough to fit into these tiny houses on the side of the road.

I’m starting to believe in magic myself. You’ll never guess where our tour’s first stop was after leaving the airport? We went to the Café Loki, of course! My little mascot that I’ve been bringing on trips is named Loki (and to be honest, I chose the name somewhat randomly several years ago), but he is also a Norse God who is famous in Icelandic legends. We had breakfast under a giant mural telling the tales of Loki. I’ll try to learn more myself, so that I can share it with you!

The mural showing the stories of Loki’s adventures 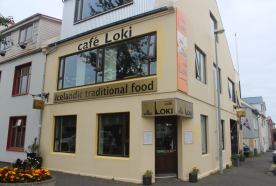 Loki in front of the front door to Cafe Loki

There are so many more mysteries, in everything I hear and see. Why is the Icelandic language so funny to my ears? Why do people paint pictures of themselves on the outside of their homes?

Right now, I have more questions than answers, but I will try to find out as much as I can to share with all of you at home. There’s no doubt that there are going to be many more magical things to see in the upcoming days. Stay tuned… How cool would it be to live here?! Doesn’t it look like a fairy tale?