Shinjuku: my neighborhood during my stay in Tokyo 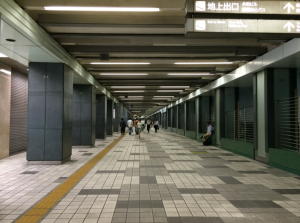 It was easy to get lost in Tokyo. One time I went out for a walk and ended up in a tunnel that seemed never ending. I figured it would eventually take me to the subway, but after what seemed like endless walking, I emerged and saw that I was back in front of my hotel. Somehow I got all turned around. Another group of my American friends got so lost that they ended up hailing a taxi to drive them just a few minutes. 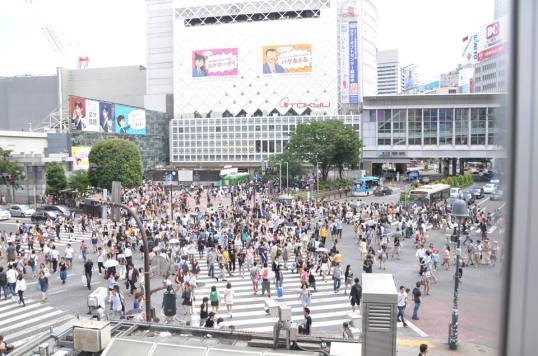 A crowded intersection in Shibuya

Why did I find Tokyo so confusing? It wasn’t just because it is the biggest city in the world, with about 36 million people living in the Tokyo Metropolitan area.  It wasn’t just because our hotel was in the Shinjuku neighborhood, which is right downtown among lots of businesses, government buildings, and shopping. I can’t even say that it was because we were steps away from the busiest train station in the world, or because of the the flashy colors and language differences. 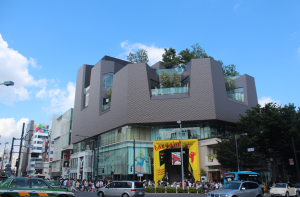 A park on the roof of a trendy shop

Tokyo is so hard to navigate because it is a 3D city in a way that I’ve never experienced in any other city. It’s literally built so that things are happening on many levels above and below ground.  There are skyscrapers which go way up high, but also deep into the earth, with stairs going level after level underground. After a while of walking around trying to read unclear maps, I finally figured it out — there are multiple “street levels” in Tokyo. I tried to capture it in a video: 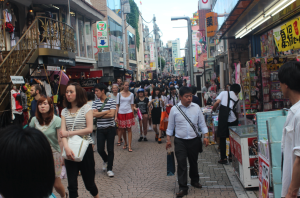 Takeshita Street in the Harajuku Neighborhood

A lot of times, what was happening underground was just as interesting as what was happening above ground. For example, I really enjoyed exploring Takeshita Street, known for its fashionable teenage trendiness. At one point, I saw a random staircase leading underground, so I went to check it out. In a dark hallway under the street, Japanese girls had a whole mecca of photo booth type machines, where they could get dolled up and take instant photos of themselves, with photoshop-type features to make them look ultra-glamorous.

Some teenagers showing off their idol earrings in the Harajuku Neighborhood

Girls primping, getting ready to get their photos taken.

A group of us did try out one of these photo machines, but we didn’t know how to use all the special features, like making our eyes big and skin blemish free. It still came out pretty well!

From a photo machine

Another time, I was checking out an Anime shop, with 5 floors of cartoony fun. On the bottom floor, there were a ton of young guys playing Pokemon or Magic style card games (but something else I didn’t recognize). 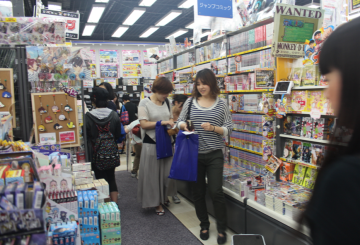 I was so impressed with myself when I finally found the Anime shop!

All five floors of Anime!

On the lowest level, the guys were playing away.

As you can see, exploring Tokyo was a multi-storied experience. Our hotel, the Keio Plaza, went up to the 47th floor, and the lobby was the 3rd floor. At first, I was confused about why the lobby wasn’t on the first floor, until I realized that there were ways to get outside from the 1st, 2nd, and 3rd floors! It was especially fun to go up high and check out the scene from up above.

It’s amazing that I didn’t get lost more often, especially when I was trying to navigate the Tokyo subway system, which is like a whole underground world. But I think I’ll save that for another post. Stay tuned — some things are just too complex for maps.