Reading the Air in Tokyo

A Japanese couple take a selfie at a Buddhist temple

I learned this morning that there’s a Japanese saying that says “Kūki o yomu” which literally means to “read the air.” That’s what I’ve been trying to do so far – just be observant and take it all in. Parts of Japanese culture appear to be somewhat subtle and reserved; people are polite and unassuming. Moments in Tokyo are quiet and peaceful.

Another side of the culture is fast-paced, colorful, and lively. We are staying near Shinjuku Station, which is the biggest train station in the world, with 1.2 billion people passing through every year. It’s just huge and like a big underground maze.

Taking a photo in the bathroom. What a view!

We spent the morning in meetings, mostly listening to lectures about Education for Sustainable Development. It was a lot to take in while experiencing jet lag, but it’s just so thrilling to be in the room with this group of people. Matt Sussman, the executive director of Fulbright Japan, said that after he met us in San Francisco, he described us as “having the energy of 20 year olds, but with people who actually have the position to do something with it.” We’re all just so excited – both when we talk about the projects are students are working on, and when we marvel at the stunning view out the window from the bathroom on the 44th floor of our hotel.

In the afternoon we set out to see some of the city on a bus tour. We saw a few special sites, including the Imperial Palace gardens and the Asakusa Buddhist Temple (which was interesting because it mixes the Shinto religion into a Buddhist environment). I even got my fortune read!

Part of the Buddhist temple

Loki visits the Imperial Palace too 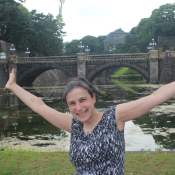 Hooray for the Imperial Palace! 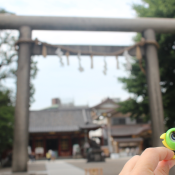 Loki at the Shinto Shrine

After the tour ended, a group of us stayed in that area to explore more. I think the photos capture it best. There’s a lot of unique things to see, and I have a sense that this is just the beginning of the wonderful and weird!

Brad is too tall for the subway 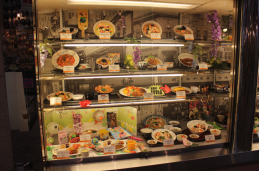 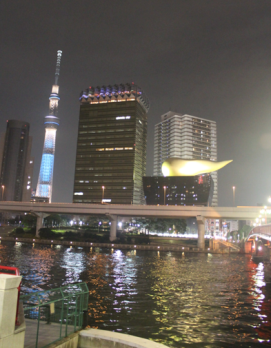 A group of awesome teachers

14 thoughts on “Reading the Air in Tokyo”