Our agenda today brought our TGC group to three main activities in Kyiv:

Morning: Learning about the Education System in Ukraine 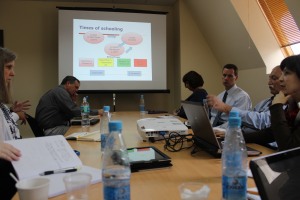 Iryna led “class” and we learned all about schools in Ukraine. In many ways, schools here are similar to in the States — they too have standardized testing, extra curricular activities, and classes like Math, Science, and Social Studies. What was most surprising to me?  More than 99% of schools in Ukraine are public, but they aren’t really free. They’re supposed to be free, but many students need to pay. There’s a lot of corruption here, so schools will force families to “donate” money in order to pass a class, take a final exam, etc. Also, many families need to pay to get into the better schools, or even sometimes they have to pay to get a top grade. This isn’t always true, but it sounds like a big problem in many places. I am interested to see whether or not this is true at my host school.

Going to a U.S. Embassy building is like walking onto American soil in another country.  It’s where the United States of America has their headquarters in Ukraine, and we had to go through all sorts of security to get in.  No cameras or cell phones allowed! It’s kind of strange to hear that hundreds of Americans work in Ukraine, but our country wants to make sure that we have a good relationship with other countries, and that Americans who live here are safe.  In fact, this is the 20th anniversary of U.S. Ukrainian diplomatic relations, which means we’ve had a base here since just after Ukraine became independent from the Soviet Union. It was very special that we got to go to the embassy, which was because the TGC program is funded by the State Department. So, we got a tour and met with officials from the political and economic departments. Did you know that many American and international companies have branches in Ukraine? Some examples are Coca Cola, Kraft Foods and H.P. So, when Ukraine had really bad problems with their economy in 2009 (worse than most other countries, with a 15% drop in GDP), it affected many Americans too.

Evening: Seeing the Ballet at the Opera House 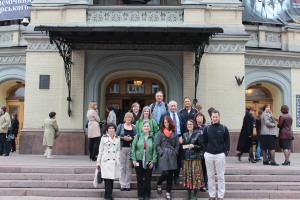 Tonight, we went to the ballet!  There’s a huge old opera house with what seemed like a dozen balconies and we saw two pieces tonight.  The first one was a famous ballet called Carmen, and the second was a colorful Turkish piece!  Even though it was in Ukraine, the stories of a ballet are told through music and dance, so there’s no language barrier. It felt just like going to the theatre in the United States!  In fact, one of our Ukrainian hosts studied ballet since age five, and hearing her experience made me feel like life here really isn’t so different. They have access to the arts just like us.

I have to admit that some of the real best moments of the day were the “in between” moments: trying to order dinner from a guy who barely speaks English, seeing an interesting red squirrel in a park, yummy raspberry pie in a coffee shop, and finding our way back to the hotel in the pouring rain. I have to pack to go to my host school tomorrow, so I’ll have to post about some of those things another time. In fact, I may not post tomorrow, because I’ll be on an overnight train to Zaporizhia, but I’ll try to work the video of the hopping crow into my next post… somehow.

To close out, here are some photos that some of you might appreciate, proving that the U.S. really does have some influence here:

McDonalds in Kyiv (of course)