Our world is a complicated place, and so sometimes we need to work together to make sense of it. Today, I went to my first TED Talk event: TedxSomerville. 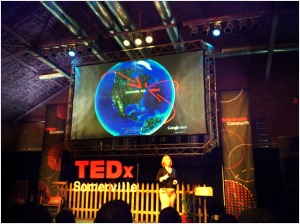 For those of you who haven’t heard of Ted Talks, look them up. Basically, the idea is to have people from all walks of life give talks about ways to make the world better.  Their tagline is “Ideas Worth Spreading,” and TED stands for “Technology, Entertainment, Design.”  It’s so much more than just those words. TED is about identifying people who are true innovators, and having them share their ideas and inspire others to go out and innovate in their own way. I watch TED Talks online when I come across a topic that interests me.  During my course on global education, I was blown away by the educators who have used these talks to offer different view points on how to teach.

Today was my first time seeing TED Talks live, and I was impressed.  There are a lot of people out there who are thinking globally and acting locally.  Even though the event focused on the city of Somerville, many speakers showed the power of global connection.  What happens elsewhere has an impact on us, and what we do affects others far away.  Some examples:

I have to admit that it was a long day; I spent most of my Sunday sitting in a chair listening.  There were a few breaks to get up and talk about what we were hearing, but not enough.  Many participants were tweeting online throughout the event, which was odd — it seemed to both build community and take away from being present in community.  The stream of dialogue was exhilarating to read, but seeing a bunch of adults sitting in a room together staring at miniature screens was not so inspiring.  Even though it was sometimes hard to be an active listener, I am grateful for this opportunity to learn, to listen, and to figure out how to turn these lessons into action. I encourage others to learn from the rich catalog of TED Talks online.

If you are a student, check out this inspiring TED Talk by a 12 year old girl who says kids have a lot to teach adults:

If you are a teacher, check out this amazing TED Talk about the changing needs of education:

There’s a power in words, but there’s also a power in art, and sometimes the most influential people don’t need to say anything.  This isn’t a TED talk, but check out this amazing Ukranian artist whose work I saw online and found truly moving:

One thought on “Ideas Worth Spreading”