The Living Desert, by the Sea

The Namib Desert runs along the coast of Namibia, and it’s pretty incredible to see the ocean on one side of the road and sand dunes on the other. I couldn’t get them both in one photo, so here are two photographs side by side, and you’ll have to imagine 🙂

Actually, I attempted to film it out the window of the truck, as we drove, and you can sort of experience what it was like:

One minute, you’re looking at flamingos in the ocean, and the next, you’re sweating buckets in the desert.  Ok, first, you probably want to see the flamingo photos! See if you can spot the pelican in there too. 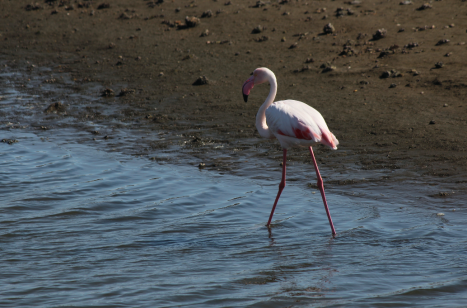 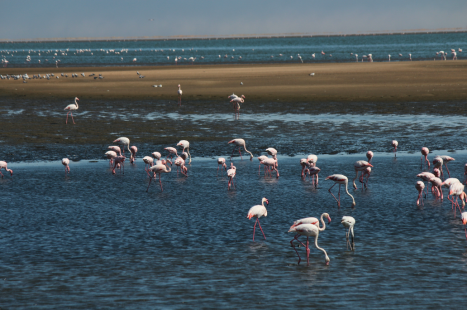 I am really interested in animals, so I went on TWO different desert walks to check out what lives in the desert. We took jeeps out into the desert and tried to find tracks to point us to living creatures.

While the guide was telling us about the desert, trackers were out looking for creatures, by identifying tracks in the sand. 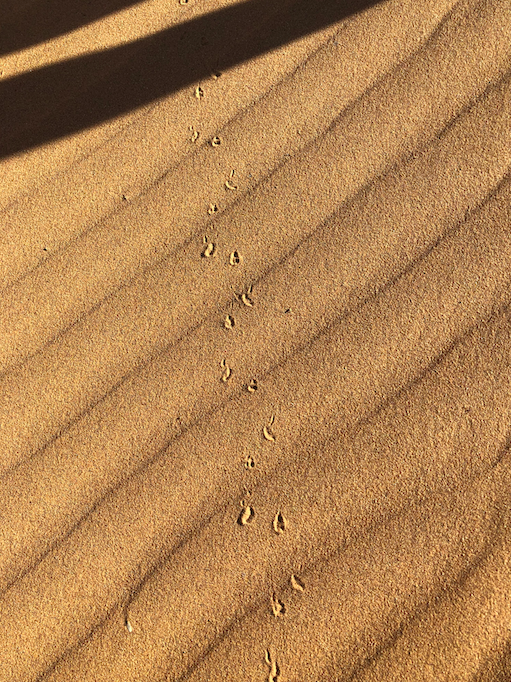 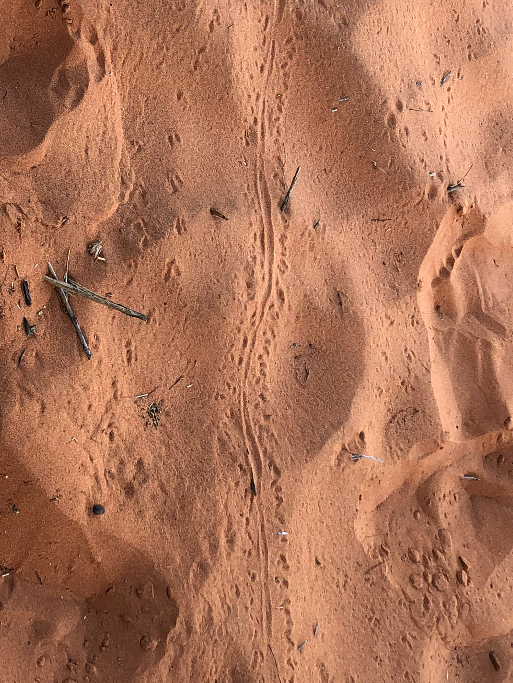 The sand itself is interesting to learn about, because there are so many different minerals which make it appear with all sorts of colors.

The black part is actually iron, which is magnetic. Check out what happens when the you put a magnet up against the sand!

The Namib Sand Sea is a UNESCO World Heritage Site because it’s the only desert in the world able to sustain life through fog. The fog brings in little pieces of detritus from plants, which bugs eat, as well as drink up the water in the fog. Then, other bigger animals, like geckos, can eat a beetle and it’s like a drinking a whole water bottle! They get their water from eating insects.

We were lucky to see lots of animals in our hunt, beginning with a male Namaqua Chameleon, who did not seem at all fazed to have a giant group of humans surround it. Maybe he had seen these guides before, who came bearing worms.

The chameleon was pretty pleased to get fed worms. Their tongues are incredible, and I’m not sure this video captures how cool it is to watch them eat:

Want to see that in slow mo? 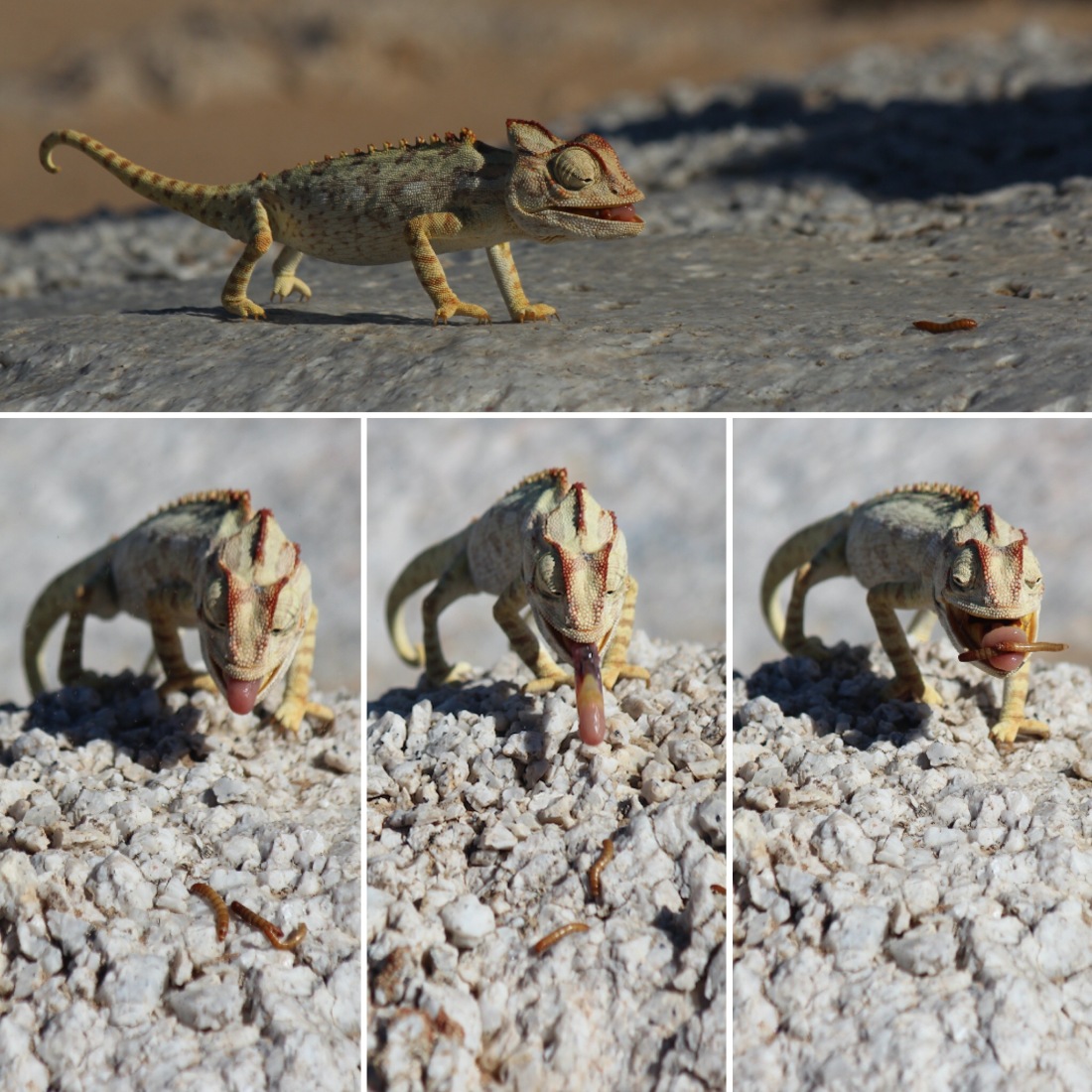 Next up, the trackers spotted a Namib day gecko, which got scared and dropped his tail when the guide picked him up. The tail kept moving after it was detached! That’s a way of distracting predators so that the gecko can escape. Whoa.

Here’s a shot of the little guy, unfortunately, without his tail: We also got to see a Shovel-Snouted Lizard, who was a real cutie:

On the less friendly side, we saw the most neon yellow scorpion I’ve ever seen. Ok, I’ve never seen a yellow scorpion, but apparently the Namaqua thicktailed scorpion is not so uncommon here. I’d rather not get in the way of one of these.

Scorpions are closely related to spiders, which can be a little creepy as well. This one is really interesting though, because it makes a trapdoor in the sand. 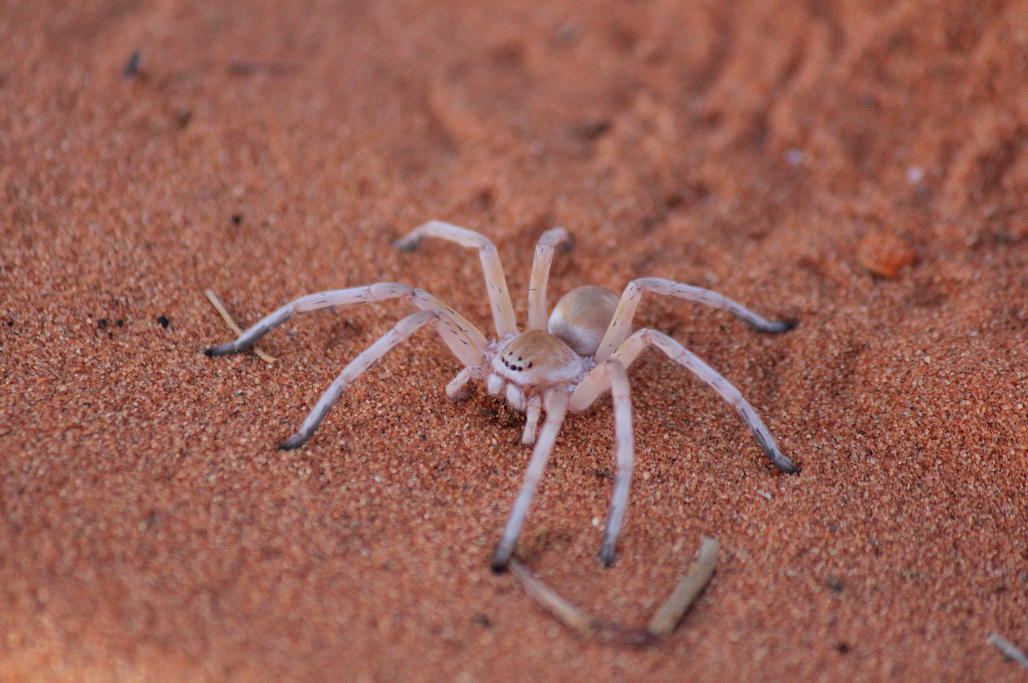 The guide found it by digging underneath the trapdoor, which I believe I stepped on, but he still spotted it. Unsuspecting bugs step on the trapdoor and then the spider gets them! Totally incredible. 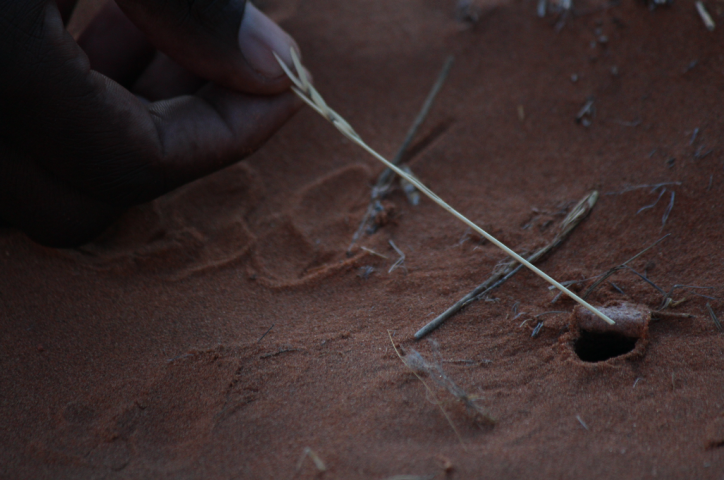 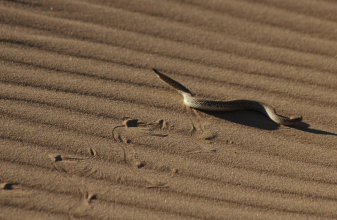 But onto an even more frightening animal! I don’t think of myself as a snake person, and especially not when they’re venomous, but it was pretty exciting when the guides spotted a Peringuey’s Adder, or Sidewinder Snake. The guide said that if you get bitten, you won’t die, but “you might wish you had.” Their venom attacks in two ways, with a neurotoxin and a cytotoxin, so you could end up having to get a limb amputated. There’s no counter-venom, so you can only treat the symptoms. Awesome. Our guide seemed surprisingly calm, considering he was barefoot. Mostly the people in the group just seemed excited to see the way this snake moves sideways. Which is pretty cool, but I tried to keep my distance.

Actually, the snake definitely seemed way more afraid of us, than we were of it. When first picked up from a bush and dropped onto the sand, he buried himself into the sand to hide. It’s amazing to me how all of these animals have ways of hiding — the spider under his trapdoor, the gecko who drops his tail, and the camouflage of the chameleon. Even the scorpion wanted to hide! Below is a different chameleon, by the way, but the same species as the other one, who was so much paler! He’s camouflaging with the bush. 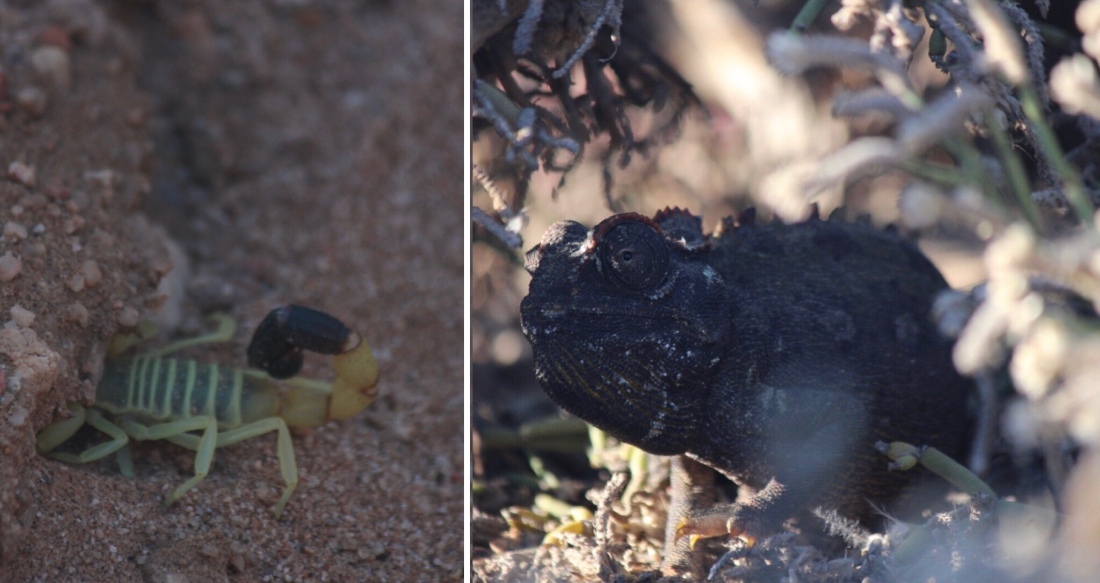 One animal that wasn’t shy was the tractrac chat bird, who came right over when we stopped for snacks. The birdies apparently know that the guides carry worms to feed to the lizards, and sometimes the guides will share with the birds too. Some great photographs were acquired as a result. Before this trip, when I imagined the desert, I had no idea how many creatures could live in the sand! My eyes are opened!