What part of Europe will I set out for TOMORROW?

I leave for a trip tomorrow! Here’s where I’m going… drumroll please…

In case you can’t see on the map, that’s Italy, Slovenia, Croatia, and Bosnia & Herzegovina. I’ve never been to any of these places! Maybe we’ll even hike into Austria, since we’ll be right by the border. Here’s a close up of the area, for those of you who aren’t geography nerds like me:

I’m not sure what to call this region, because I’d imagine most people would look confused if I said “Southeast Europe,” and it’s not really all that south or east compared to a country like Greece. Perhaps these regions are defined by being around the Adriatic Sea? However, Slovenia, where I’ll be spending a good chunk of the trip, is a country with very little coastline. In fact, much of the time I’m there, I’ll be up in a corner of the Alps.

This is an area that is also defined by its history. It was once part of the vast Roman Empire, and much more recently, Slovenia, Croatia, and Bosnia/Herzegovina were part of a country called Yugoslavia.

I’ll be on the northwest edge of an area that has seen a lot of violence and change in the not-so-distant past. 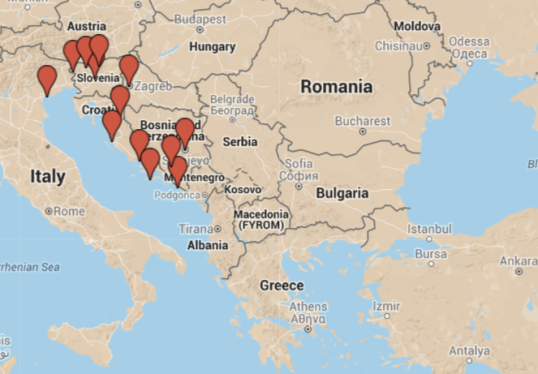 Why did I choose this part of the world? Basically, some friends recommended it, and I got really interested as I started doing more and more research. I’m not doing any kind of exciting fellowship like I did in Japan and Ukraine. I’m going to have an adventure and expose myself to some new people, places, and perspectives. Hopefully, I’ll have a bunch of fun too!

It’s a strange time to be traveling. The U.S. state department has issued a travel alert for the entire continent of Europe, and our own country doesn’t always feel like a safe place to be either. I’m torn between wanting to find ways to fight against the injustices of the world, and wanting to escape them. Hopefully, I can do a little bit of both on this trip — and I’ll return home with some new insight on how people can get along just a little bit better. If there are moments when I feel anxious, I’ll just remember that even though I’ve never seen this corner of the world, many people call these places “home.” And so… Tofu San and I are off to finish packing!

5 thoughts on “What part of Europe will I set out for TOMORROW?”