I made up the Vator Shop to help students learn about economics principles, but today as we discussed preparation for our test tomorrow, and the students came up with many more ways to study. Some favorites include: 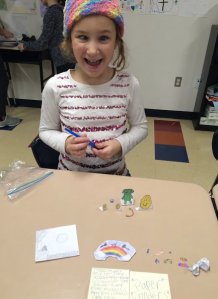 It’s also possible to use a blog entry to study! My morning class, known as the “Cool Kids” came up with these questions about a character named George with a very original business idea. Can you figure out the answers yourself? To keep things interesting, we’ll also include some photos of Vator Shop highlights from this quarter.

1. George is a creative business person who came up with an idea for a new chocolate bar with surprises every bite. You never know if you’ll hit a piece of caramel, oreo, or some other goodie. What would we call him — an entrepreneur or an economics? 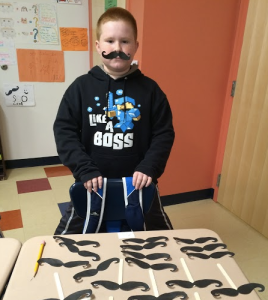 2. George and the man in the yellow hat are selling chocolates. At first, people haven’t heard of his “surprise bars” so the demand is low. What should he do to the price?

3. If later on, the surprise bar becomes really popular, what should he do to the price?

4. In the early years of his business, George had trouble finding cheap supplies. He spent $3 on chocolate for each bar and $2 on the surprises in each bar. He sold the bars for $6 each. What was his profit for each bar? 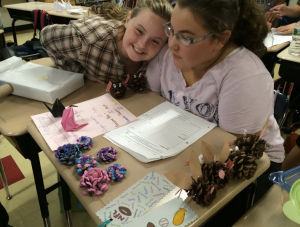 5. If George had trouble getting caramel and couldn’t produce as many bars one month, what should he do to the price?

6. George bought $87 worth of chocolate, which weighed 20 pounds. Each chocolate bar that he makes uses 1/10 of a pound, and he sells them for $1 each. He uses 17 pounds of his chocolate to make surprise bars. What is George’s profit?

7. George is interested in how many people want to buy his surprise bar. What is it that George wants to know?

8. George wants to raise demand for his surprise bar, so he gives away samples. Unfortunately, some loud people say that it’s too sweet, so other people become less interested. What should he do to the price?

9. George started his business in August of 1986. At the beginning of his business, the demand was low even though his prices were low. The chocolates kept on melting . . . But on the 24th of March 1990, the president of the United States of America had a little taste of (for a show called America’s Test kitchen as their chief guest) George’s chocolate mustaches. “I think that they were really good” he said. So he gave George the money to make an advertisement! Soon people started coming to George’s shop after hearing that even the president liked it. Should George raise the prices or lower the prices? Why and why not?

10. If George wants to keep his money safe, but he knows he’ll need to buy more supplies often, what kind of savings method should he use?

11. George’s friend Jim wants a chocolate Ferrari. He knows he needs to save up for this big purchase, but isn’t sure how long it’ll take him to save. Which method should he use?

Click here to see the answers to the questions above.