Tofu San continues to be very busy! Omi Sensei sent photographs of his visit to the land of Harry Potter in the United Kingdom. He traveled to Hogwarts via Platform 9 3/4 at King’s Cross Railway Station. Here you can see Omi going right along with him! 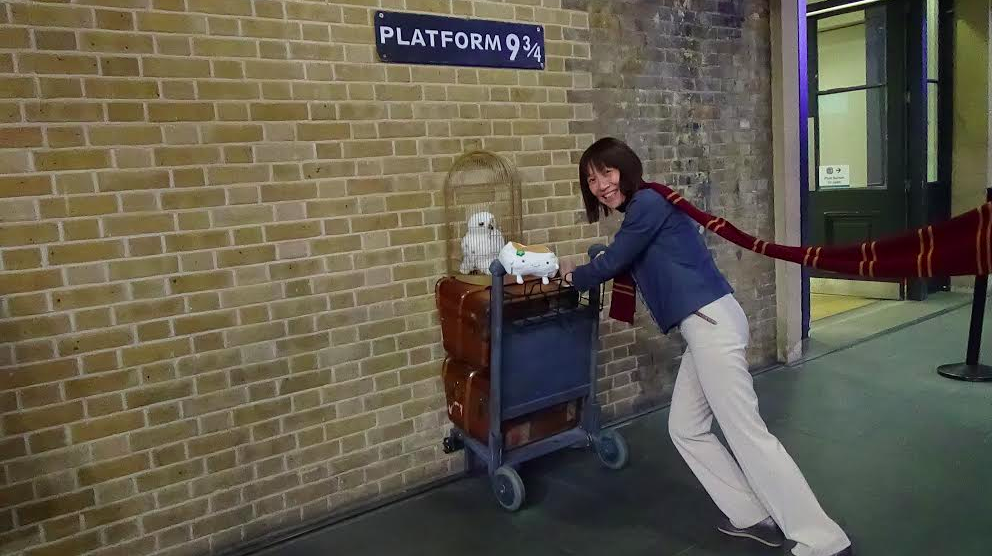 Tofu San also got to dine in the great dining room of Hogwarts (actually at Oxford University). I don’t think he got to meet Harry Potter, but he looks pretty excited, right? 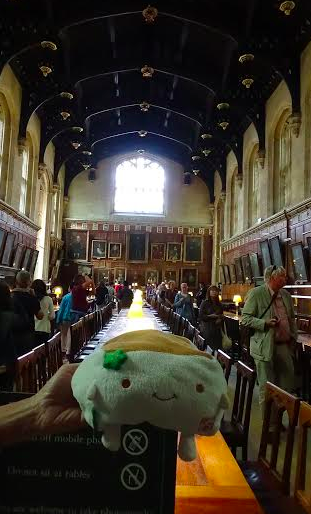 If that weren’t enough excitement, this past weekend, Tofu San Jr. came with me to a wedding in Washington DC. He enjoyed riding on an airplane, though it was very early Saturday morning. 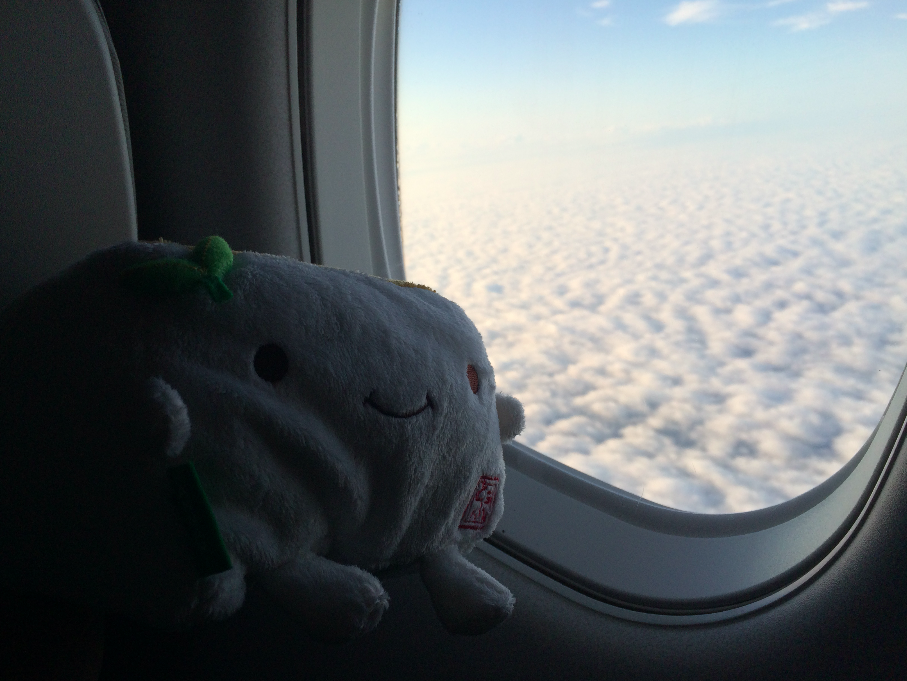 The wedding was actually a bit out of the city, on a farm in Maryland. Tofu San enjoyed visiting the barn and celebrating a new marriage. It was once a dairy farm that held something like 75 cows! 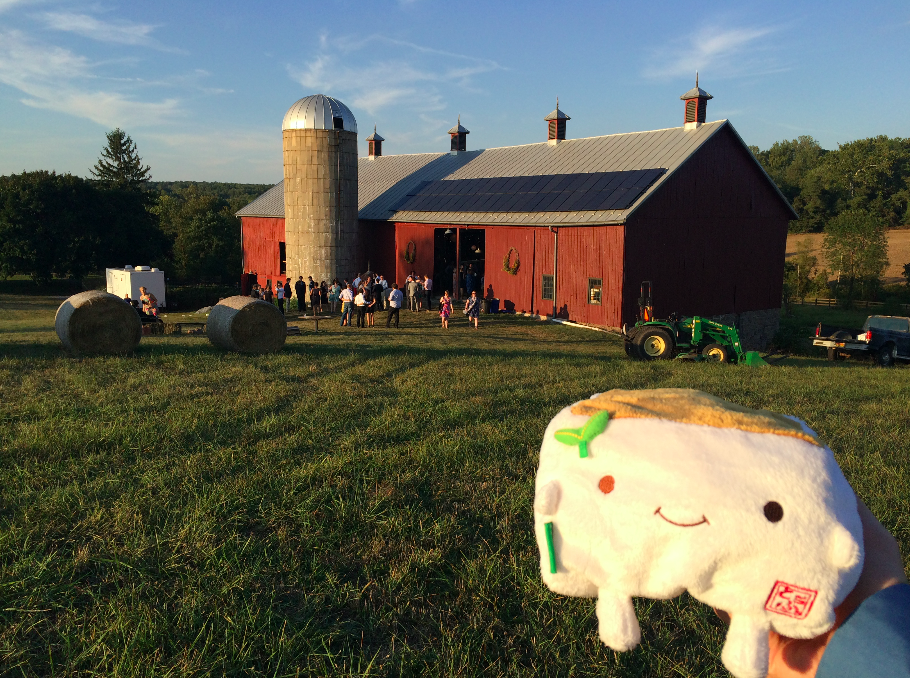 Tofu San considered partying on the dance floor, but then he realized that his legs are very short for dancing. 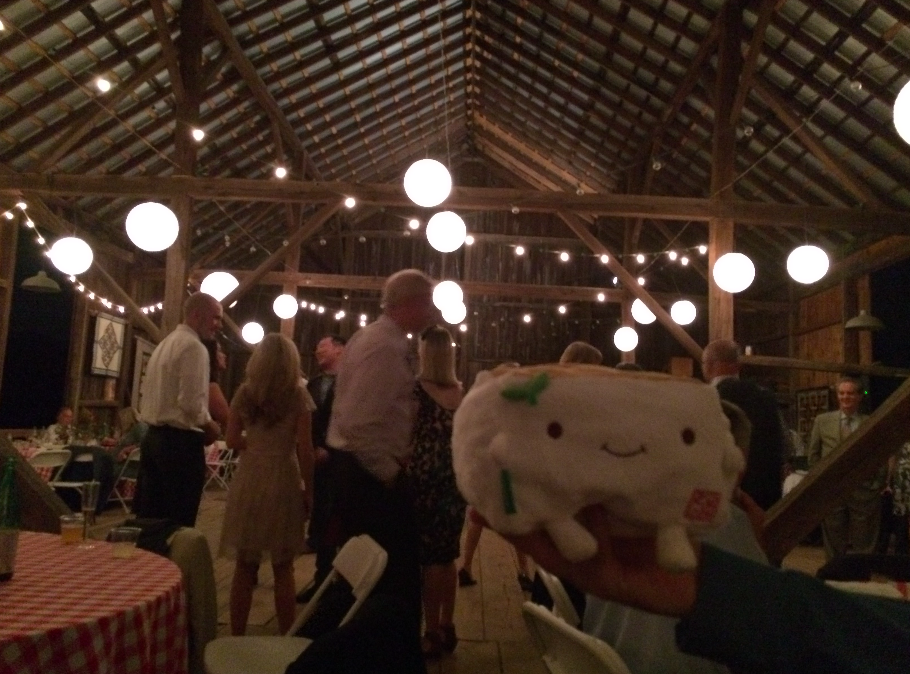 Tofu San got some time to explore the city of Washington DC on Sunday. He saw many important government buildings and museums. Most of them he just saw from the outside, because he was on a busy schedule. 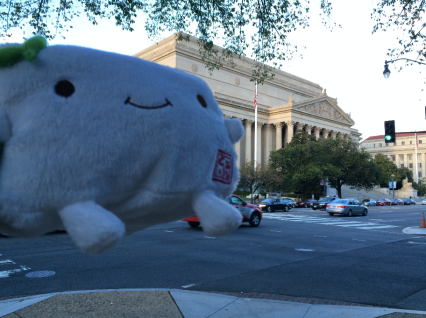 At the National Archives 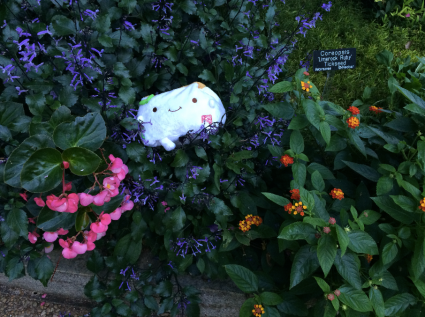 At the butterfly garden 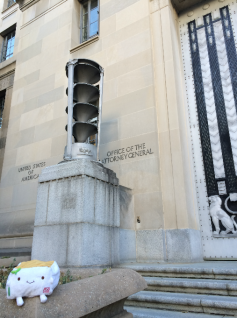 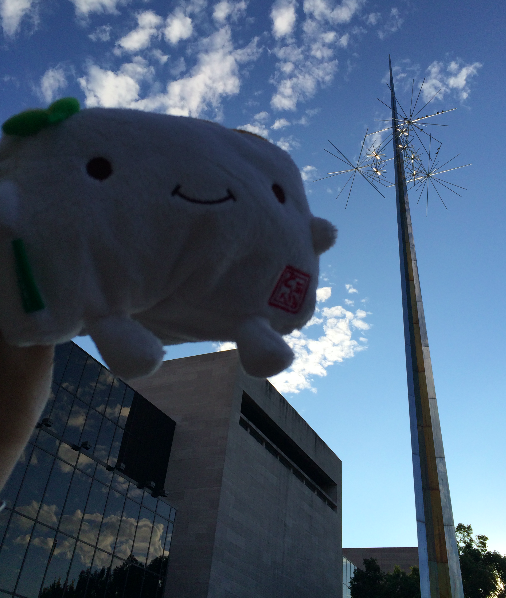 He got to the Air and Space Museum after it closed, but saw some outdoor exhibits. 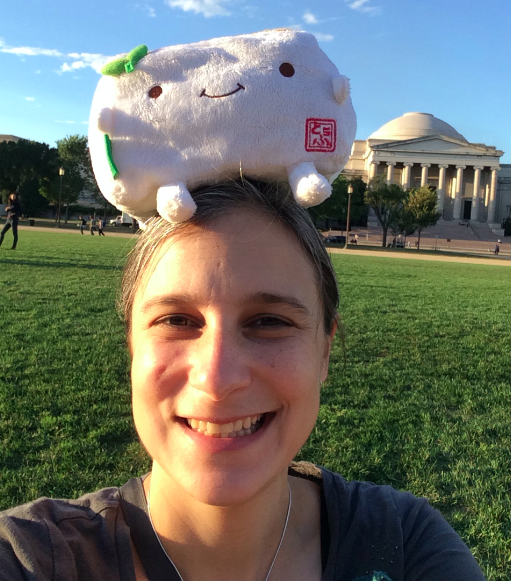 Doing gymnastics in front of an art museum

He did get some time to relax on the Mall, which is a big public green with the Washington Monument at one end and the Capital Building at the other end. He also met some of my friends from college. 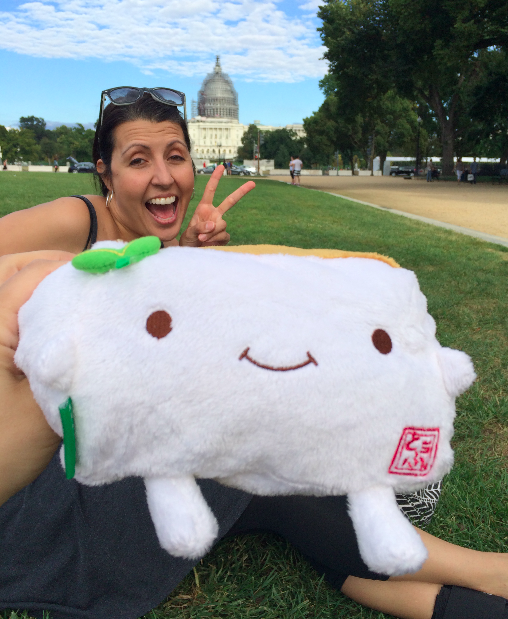 Tofu San loved his visit to the National Zoo, where he saw many interesting animals. 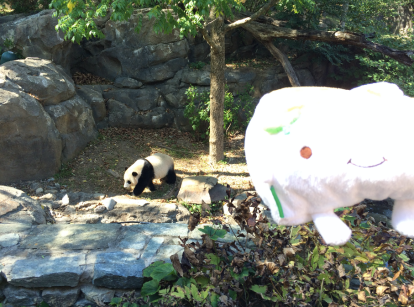 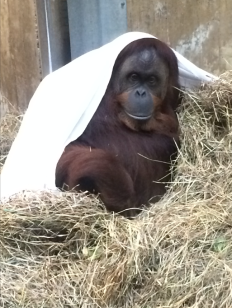 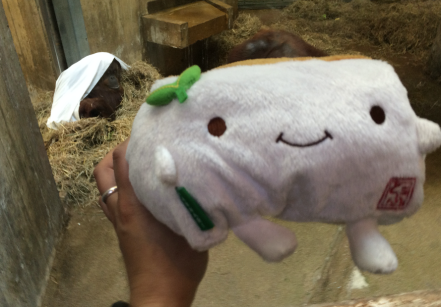 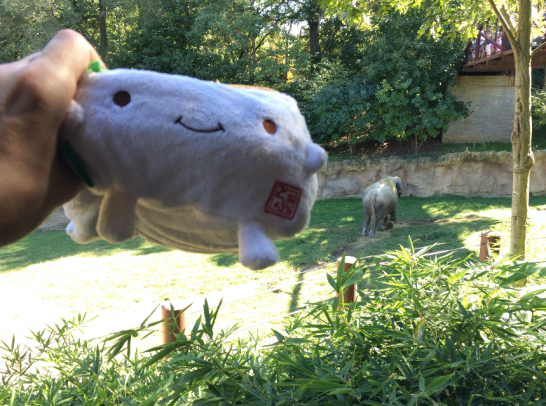 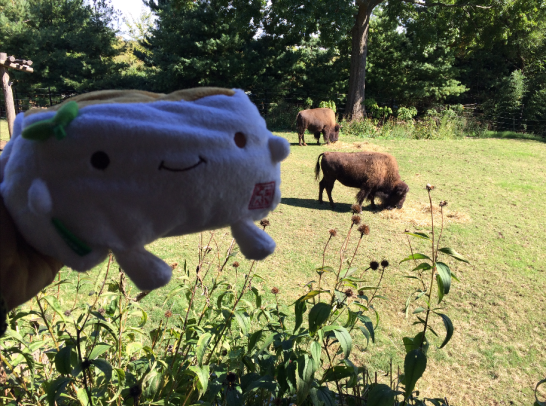 Overall, he just enjoyed checking out the beautiful city, with its interesting architecture. 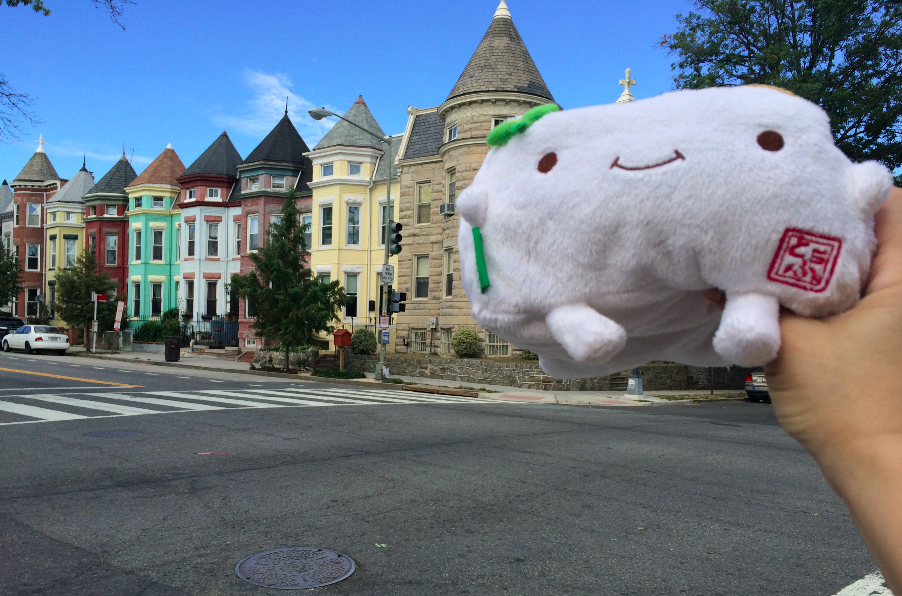 He noticed that Donald Trump is even building a hotel! 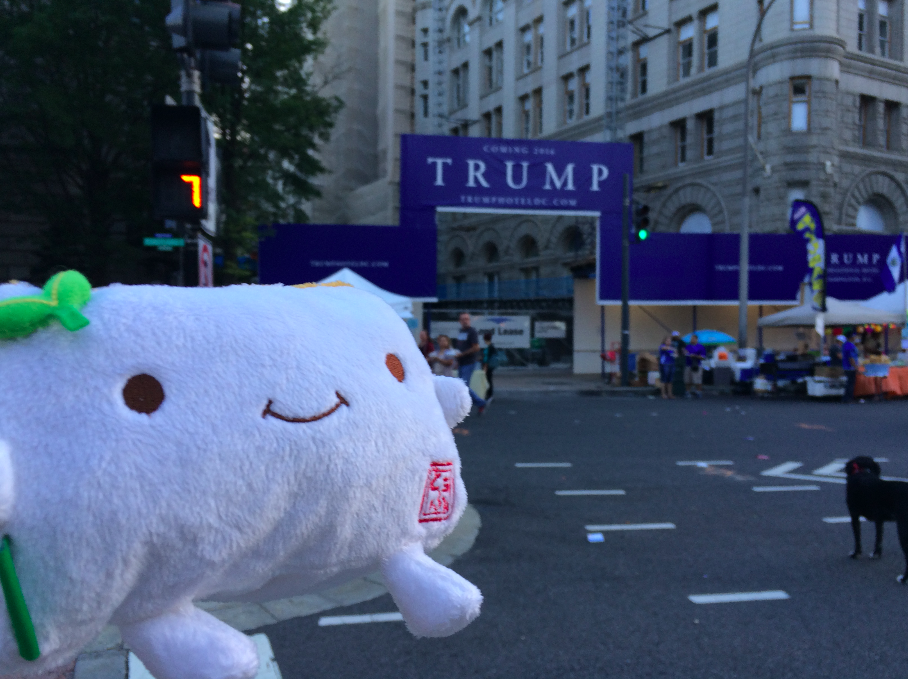 He didn’t spend too much time checking it out though, because he was distracted by the Hispanic Festival going on, with lots of proud people from El Salvador. 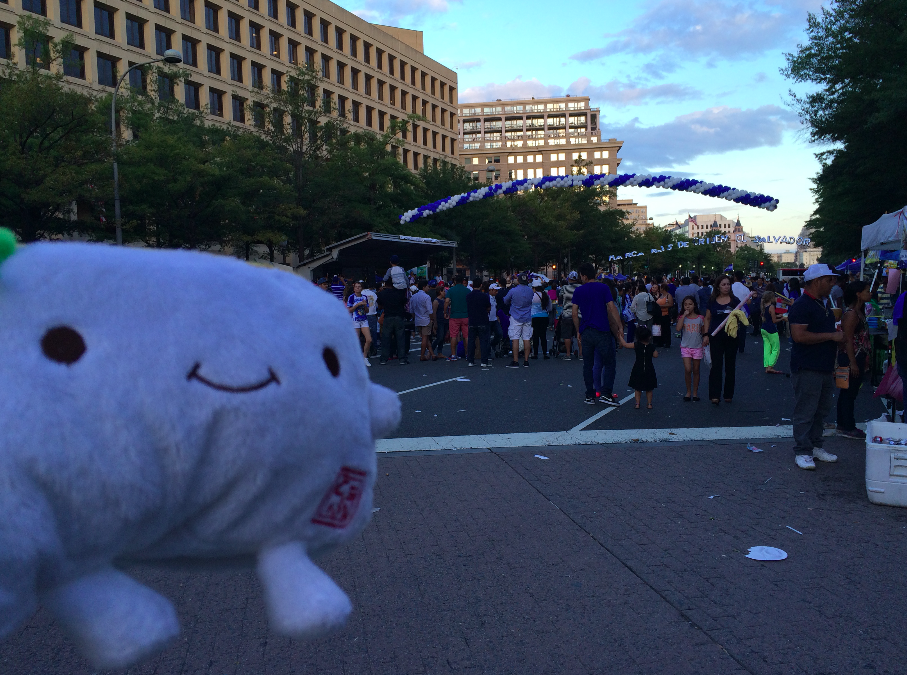 Just a few blocks over, he found himself in Chinatown. There’s always a lot going on in DC! Overall, it was a fun weekend for me too, with some time to explore my own country’s capital city as a tourist. Since I wrote about the bathrooms in China and the fancy toilets in Japan, it’s only fair that I also note the interesting restrooms I saw on this trip to DC. At the Hotel Monaco, the view was spectacular. Don’t you agree? At a restaurant in Capital Hill, I also spotted this strange sink for the first time. It washes and DRIES your hands in the same place. Have you seen one of these before? 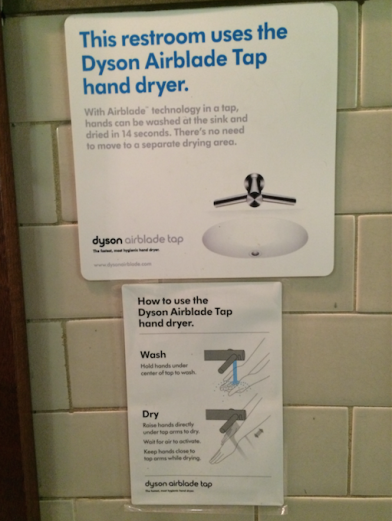 Tofu San and I had such a fun weekend, and you can expect more adventures soon. Where will he go next?! 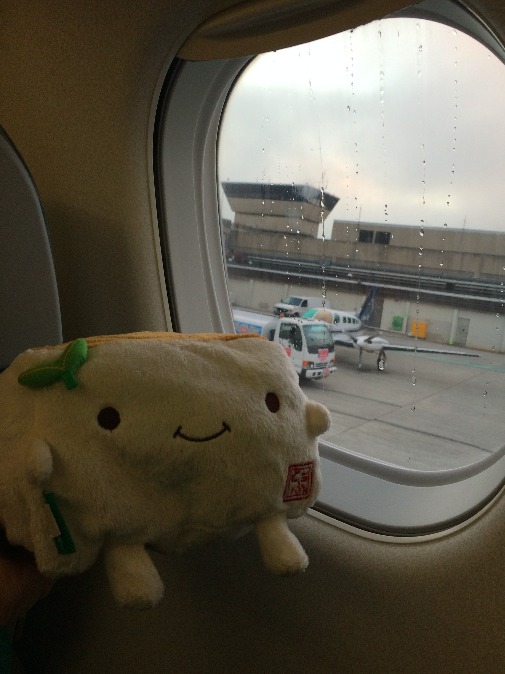