Yesterday, we visited the Sacred Monkey Forest Sanctuary of Ubud. It lived up to its name! There were beautiful temples, trees, and monkeys everywhere. It was possible to get pretty close too, which was simultaneously amazing and terrifying.

I know you probably just want to see cute photos of monkeys, so I’ll just include them here, along with some interesting facts from the brochure we got upon arrival. I had trouble choosing my favorites, so this is a monkey heavy post. Enjoy!

If you want to interact of feed the monkey, please exercise caution. If you give bananas or food to the monkey and they approach to take it, do not ever try to pull it back. To maintain the monkey’s health, please do not feed the monkeys peanuts, biscuits, bread, or other snacks.

The mission of the Sacred Monkey Forest Sanctuary is conserving the area based on the concept of Tri (three) Hita (happiness) Karana (the cause). Thus, Tri Hita Karana means “Three ways to reach spiritual and physical well-being” or how people maintain a harmonious relationship in their current life. Those three relationships comprise of harmonious relationships between humans and humans, humans and their environment, and humans with The Supreme God.

As well as being the lungs of the city, rare plants are cultivated for conservation purposes alongside those used for rituals.

The forest area is sanctified by the local community. There are some parts that are prohibited for the public to see or visit, for example the sacred area or temple. The temple area is only accessible for those willing to pray and wear proper Balinese dress.

There are about 600 monkeys living in the area. They are divided into 5 groups. Conflicts between groups of monkeys cannot be avoided. Sometimes a group may pass into another’s territory for a specific reason, such as taking a bath in the river in the dry season.

This type of primate is active during the day and rests at night. Their gestation period is about 6 months and generally they give birth to only one infant; they rarely have twins.

The infant stays with their mother for about 10 months, and thereafter they will be weaned in order to live independently. 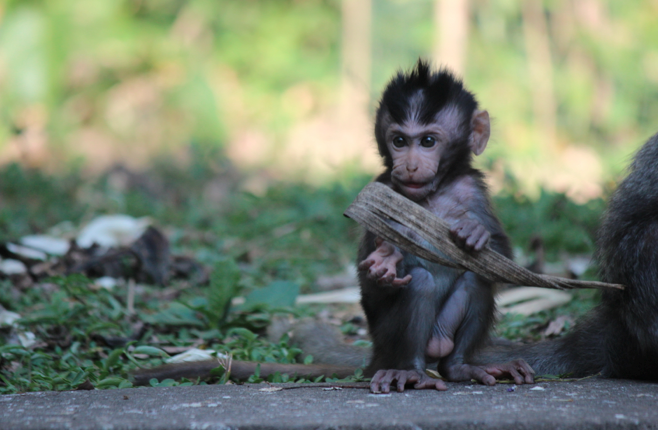 Mothers intensively care for their infants; even female monkeys who are not the parent may also participate in caring for the baby. 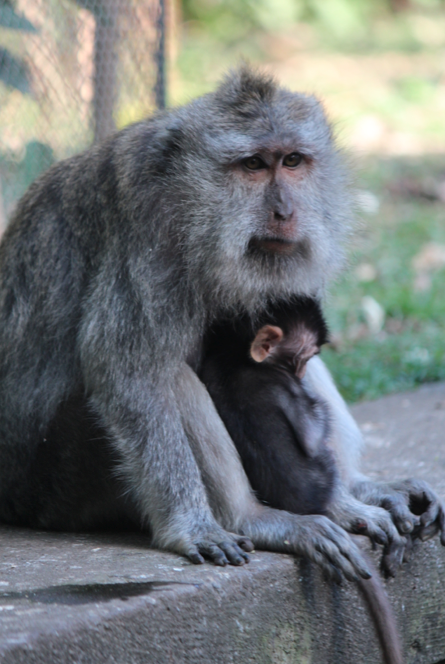 The lifespan of male monkey is up to 15 years while female monkey can live up to 20 years.

Long-tailed monkeys are omnivores. In the Monkey Forest Ubud, the main food they eat is sweet potato, given 3 times a day, combined typically with one of the following: banana, papaya leaf, corn, cucumber, coconut, and other local fruit.

And… a few more cute ones, because you can never have too many monkey photos, right? 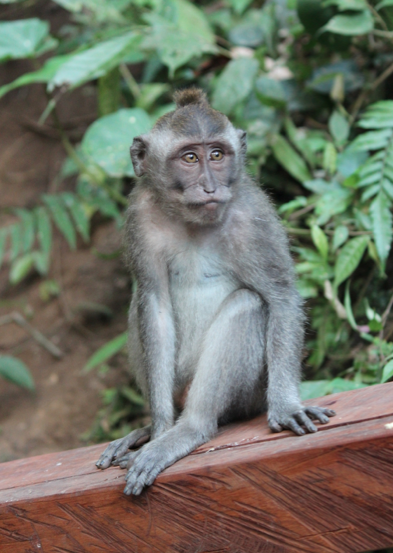 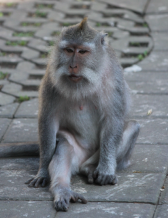 Note: I used a zoom lens for most of these photos. These monkeys can be pretty dangerous, as they do bite, and could carry diseases. There were Monkey Security guys at the park for helping to keep visitors safe. Note the band-aid on this monkey security guy’s finger. Yikes!