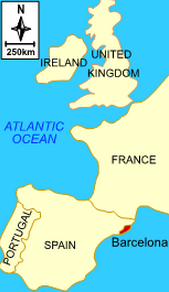 Today’s guest post comes from Sean, who will be starting 6th grade next week! While his sister Alex wrote about her experience in Ireland, he chose to write about a different part of their summer adventure. If you’ve never seen the Sagrada Familia in Barcelona, you are in for a treat.

Hello Innovation Academy. This summer I went to 5 places in Europe: Ireland, France, Spain,  Austria, and Poland. One of my favorite places was Spain. There we saw Spain’s greatest work of art. The Sagrada Familia, which means “Sacred Family” was created by the amazing architect, Antoni Gaudi. This is the Sagrada Familia from a distance: 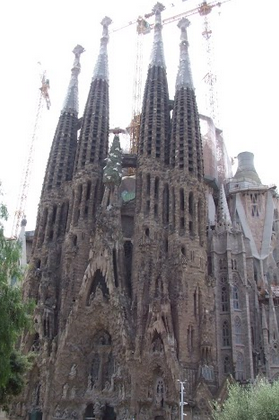 The Sagrada Familia — it seems small, but is much much bigger in real life.

This is an enormous church that started being built in the 1800’s, and is estimated to be finished in 2030. At the moment, it is about 60% complete. The outside has two facades, called the Passion Facade and the Nativity  Facade. the Passion Facade shows all the events that happened at the crucification of Jesus. The sculptures on the side of the church are crude blockish and cold, to show what the feelings were at the crucification. The other side, the Nativity Facade, shows Jesus’s life as he was growing up. The sculptures here are soft, detailed and inviting to show what life for the Holy family (Jesus, Mary, Joseph) was like. 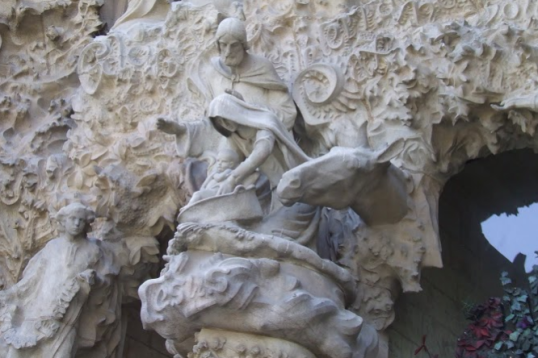 This one of the scenes from the Nativity Facade, with the Holy Family at Jesus’s birth.

There are also 4 large towers coming from each corner of the church. In the middle, there will be a 5th tower built and it will be the largest tower. On the inside there is a large hollowed out area where hundreds of people walk, taking the audio tour and praying In the middle, there are pews and chairs set up for mass, and for people to pray.

This is me and my family on a bridge connecting two of the towers. We’re close to 558 feet in the air. 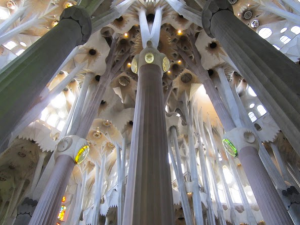 This is what I mean by a forest-y feeling

There are also elevators leading to each tower, and stairs going back down. The windows of stained glass are beautiful making it look like there is a colorful veil across the ceiling. Gaudi wanted to let in not too much, not too little, but the just right amount of light into the church. There are also pillars holding up the ceiling. These give a forest-like feeling, with sculptures of leaves on the pillars at the top.

Overall, the Sagrada Familia is an amazing place, and you should definitely visit it sometime soon.