The word for “cute” in Japanese is kawaii, and they sure love cute things! In Japan, cuteness is not just for kids. You could easily see a business man with a little Hello Kitty charm hanging off his briefcase.  Even the cars are cute sometimes!

When shopping in Japan, you don’t have to look too hard to find something cute.

In addition to loving cute things, Japanese people love machines. Of course, you can buy beverages, but you can get all sorts of other things too — even cigarettes and beer.

So many drinks to choose from!

A machine that sells cigarettes? 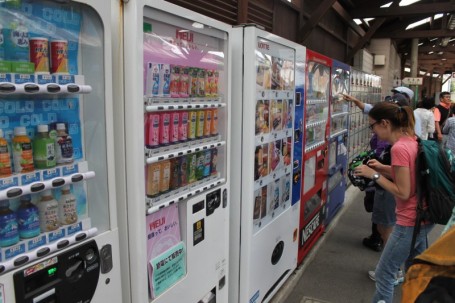 So, it shouldn’t be surprising that there are LOTS of machines in Japan that sell cute things. Ever put a quarter into a machine to get a toy? The Japanese take this to a whole new level. The average cost of a toy is 200-300 yen, or about 2-3 US dollars. 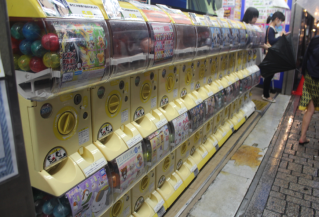 Of course I tried them out! And got a few goodies:

I was very curious about one machine that looked like it sold underwear! I didn’t need any, but I was very interested to see what it was all about, so I put in my two 100 yen coins, and got… a cell phone accessory. I don’t think I’ll be using this, but it’s a good story, right? 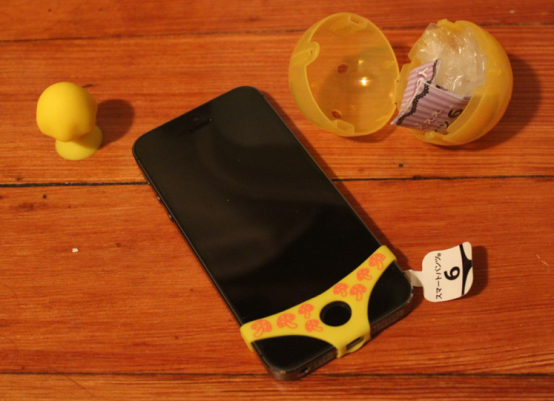 I also found this absurd machine, which printed a little figure with my face! It was only $2 to use the machine, but it turned out that this was just to make the face part, and then I needed to pay more for the figure. Still, I think it was worth the $6 for a lot of laughs: 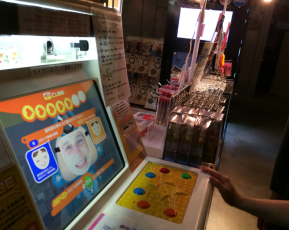 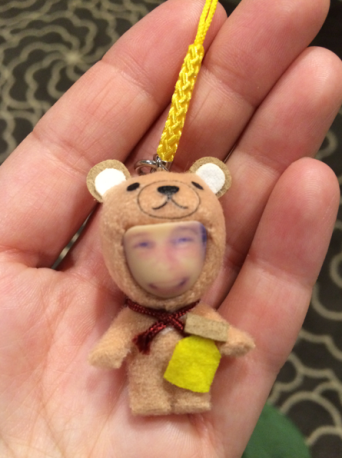 There were even giant arcade-like places with what appeared to be giant rooms of only claw machines! Of course, other places had different types of games, even one that featured Taiko drumming. The movie Ted appeared to be very popular in Japan, as I saw claw machines full of only Ted bears on more than one occasion. I even met a guy on the street who was wearing a sign asking people to exchange things. He had a tray of random items, and if you had something cute or interesting, he’d trade you for whatever you wanted on his tray. I made him a balloon flower and got a little Sesame Street mirror.

Would you have anything cute in your pocket, ready to trade? Most Japanese people probably would! If not, just visit a nearby machine, throw in your coins, and grab something fun.