The Serious and the Silly 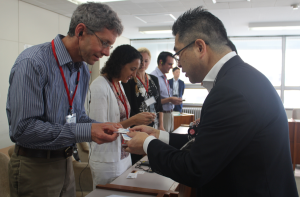 Before we met with the mayor, we exchanged business cards with important officials.

When I first arrived in Japan, I thought that Japanese culture was very serious and formal. I noticed that people take extra care to be polite in lots of circumstances. For example, when people greet each other, they arrive early and always dress in sharp clothing. They use formal language to say hello, bow a lot, and take great care exchanging business cards in a ritualistic way. There’s a lot of pomp and circumstance in general, and since we’ve gotten here, we’ve taken lots of formal group photos.

Our group posing with the Kushiro mayor and other city officials

Despite the fact that we are here to study and do serious work, we are having lots of fun and learning that Japanese culture has a really silly side. Last night, we had a formal reception where we were greeted by important people, and there were lots of speeches. 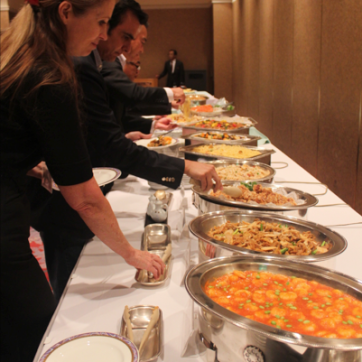 The fabulous buffet at our reception

Other important representatives also were introduced and gave speeches.

After the speeches, we got to experience a performance of a type of traditional Japanese music. Taiko drumming is an art that goes back hundreds, or perhaps thousands, of years. We got to try out a little bit of drumming also. We only did it for 30 seconds, but it was exhausting! 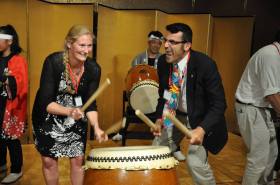 The Taiko drumming started to give us a taste for the fun side of Japanese culture, but then it got even goofier. After the reception ended, a group of us went out for Karaoke, which is very popular in Japan and definitely an important part of their culture. It’s a little bit different than in the States, because each group gets a private room. Two college students who we had met earlier in the day accompanied us, and we all had a blast: 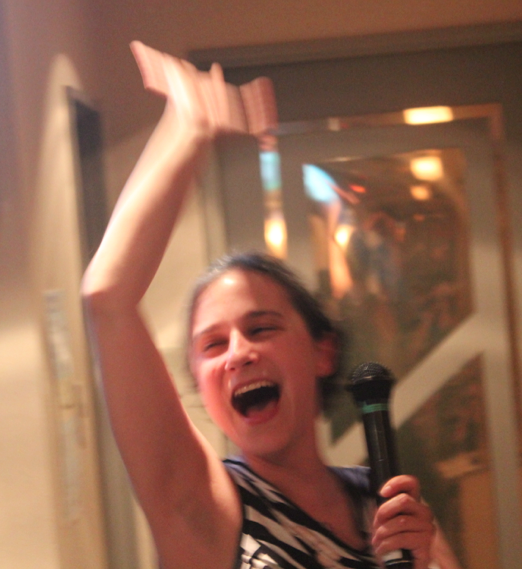 Here’s a little video montage so you can see some of the musical performances of the evening. Be sure to watch to the end to see the break dancing. Do you think it’s part of the Taiko drumming or Karaoke? Watch and see! You might be surprised to see that Japanese culture can be very silly.