I’m so jealous that IACS Middle School Principal Melissa Kapeckas got to see the Terracotta Warriors in China. Next time I go back, I would love to see this! Mrs. Kapeckas is traveling as part of a delegation of Massachusetts school leaders participating in the US-China Administrator shadowing project. Check back soon for more entries throughout the month of April.

Today, we saw what is sometimes described as the “Eighth Wonder of the World”, the Terra Cotta Warriors. This archaeological site was discovered in 1974 when local farmers began digging an irrigation ditch. 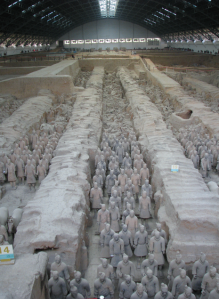 This army of warriors was formed to protect the tomb of Emperor Qin Shi Huang, who ruled from 220-206 BC. Despite ruling for a relatively short period of time, Emperor Qin Shi Huang was an important figure in history. After conquering seven distinct states and creating one unified china, he undertook major projects, such as building and unifying various sections of the Great Wall of China, standardizing a system of weights and measurements, the currency, and creating one unified system of writing.

Soon after he became ruler, he began construction of his city-sized tomb guarded by a life-sized army of an estimated 8000 Terra Cotta warrior statues. Emperor Qin Shi Huang hoped to live and rule for a long time to come, believing that his spirit would prevail in the afterworld and protect his dynasty.

Each terra cotta warrior is thought to be unique with a rough cast made in molds shaped like infantrymen, generals, archers, and charioteers and then unique facial expressions were carved by hand. Once complete, the figures were placed in a series of pits in a precise military formation according to rank and duty. Most originally held real bronze weapons, such as bow and arrows or spears, but they are thought to have been looted shortly after creation of the tomb and pieces have also rotted away.

Archaeologists are going through the painstaking process of cataloging and restoring the warriors to how they presume they appeared over 2000 years ago when they were first created.