I am leaving for China in less than 48 hours.  I’ve been trying to pack in a whole summer’s worth of New England fun in the few days that I’ve had off since the last day of school.  As I prepare for my journey, I’ve had some realizations:

Realization #1: I love summer in Massachusetts.  I am thrilled to be going on this adventure, but I also feel very lucky to live in such a beautiful place, so close to the ocean.

Realization #2: Food can tell you a lot about a culture, and it can be wonderful, strange, and everything in between.  Today, I went to a pig roast!  I’ve heard that Chinese people eat weird animal parts, like cow entrails and chicken feet, but every culture has traditions that might be considered bizarre to those from another culture. It was a bit sad to see that pig on the fire, but she lived a happy life on a farm and probably died in a much more humane way than most meat from a supermarket. I’m looking forward to trying some new foods soon. 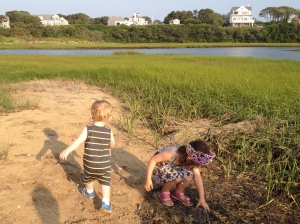 Realization #3: Learning about a new culture is like being a little kid all over again. I spent some time this week visiting with my friends’ children on Cape Cod.  It was so fun to watch them discover new things, from new types of marine life to simple pleasures like the feel of the sand.  I imagine that when I arrive in China, I’ll be just like a toddler, with so many new sights, smells, sounds, and tastes to get used to.

Realization #4: We’re all living on the same planet, even though China seems so far away.  The beautiful sunset above is a glimpse of the Atlantic Ocean, but it’s the same sun that will shine down on me in Beijing.  Even though it’s going to take me about 18 hours of flying to get there, the moon and the sun and the wind and the rain will be the same.

It’s hard to believe that I will be in China so soon!  If you haven’t already signed up to follow this blog through email or facebook, please do. There will be posts coming soon from Beijing, and you don’t want to miss it.  Also, I’d love your help spreading the word about this blog. Please share with others who might be interested.